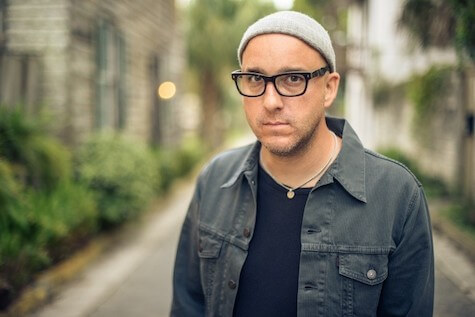 Dan Andriano is probably best known for his role as vocalist/bassist for seminal ’90s pop-punk band Alkaline Trio, for which he’s still very much a member. The official name of his solo project is Dan Andriano in the Emergency Room, a moniker in which he released his most recent album, Party Adjacent (2015, Asian Man).

Produced by Jeff Rosenstock and influence by the likes of Elvis Costello and Paul Westerberg, Party Adjacent is more more mainstream and radio-friendly than the harder stuff heard on Alk Trio releases, and that’s just the way Dan wants it.

I caught up with Dan to get his take on the ol’ Ten Questions survey. Here ya go:

Dan Andriano: The Queen Is Dead by The Smiths

“She’ll Be Comin Round The Mountain”

Traveling, making up and playing songs, winding up in bizarre situations.

I don’t really hate anything about it… but it’s a little disappointing when you book a tour, get all excited to see some far off part of the world. And then, once you get there, not having enough time to actually see it.

Hard to say… what was the bad terminator in T2 made out of?

Pretty much anywhere that’ll have me! Chicago is home so that’s really nice…

I feel very fortunate to say yes… For now, anyway. I got a head start on touring with a band when I was still in high school, and I think I was quitting my last job when I was 22.

I think I’d like to be a chef… but I’m not sure I could handle the stress.  And, I could never be one of those guys that has to put on a HazMat suit and go in a clean up a house after a super hoarder has died…

I can’t say I’ve heard any! But I’ve been to Omaha and it rules… people are always super nice, and really appreciative of bands coming through. There’s been such a great underground music scene there for decades, it’s really great to roll through and try and channel some of that energy… See you there!

Dan Andriano in the Emergency Room plays with Dan P (of MU330), Derek Grant (of Alkaline Trio) and Ted Stevens (of Cursive) Wednesday, Oct. 19, at O’Leaver’s, 1322 So. Saddle Creek Rd. Tickets are $10 Adv/$12 DOS. Showtime is 9 p.m. For more information, go to liveatoleavers.com.