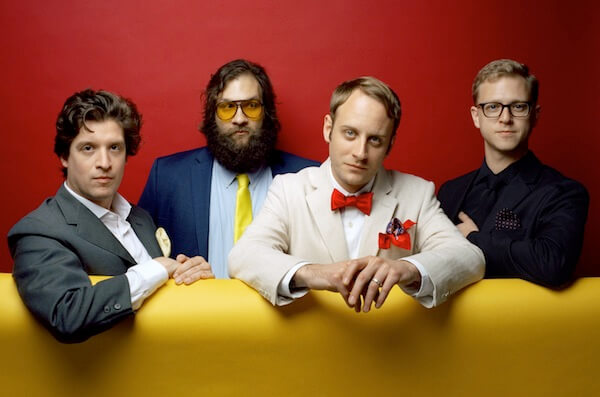 Some might describe Deer Tick as an alt country band, and certainly when they got their start in the early 2000s there was more of a twang in their giddy-up. But these days Deer Tick’s music more closely resembles an indie-fueled folk-rock act with a big heart.

Their latest releases — Deer Tick Vol. 1 and Deer Tick Vol. 2 — an acoustic album and a separate electric set,  both recorded at Ardent Studios in Memphis, Tennessee — are a diverse combination of music styles with solid songwriting snarled to life by frontman John McCauley.

We caught up with McCauley and asked him to take our Ten Questions survey:

John McCauley: I don’t know if I could pick one. Mystery Girl by Roy Orbison was the first album I had as a kid and I still really love that record. I’ve been playing the recently reissued A Man Called Destruction by Alex Chilton a lot. Probably wouldn’t count it as a “favorite” but I sure do like that record a lot.

I really don’t like “Rosanna” by Toto. Something in the way the music swings really pisses me off.

LSD. I wish I had the time to do it more often. I think it’s a really beautiful drug. It’s been a couple years since my last dose, I think I’m due for one.

Dublin, Ireland. Nice place to buy hats and sweaters, too!

It all depends on how you look at the situation. Sometimes we don’t sell a lot of tickets somewhere and the show is uneventful and that sucks. A stretch of shows like that can be really hard on you. But if you want Deer Tick behaving badly stories, they’re quite numerous. One gig in San Francisco we didn’t get paid for because I took my clothes off and got the crowd to started a chant, cursing the sponsor. I was pretty deep in my cups that night and determined to make mischief. Some people thought it was really funny. I think it seemed to some people that I was having a meltdown. I dunno, maybe I was! The guy who did the lights that night said it was the best show he’d ever seen, but other spectators thought the show was a total disaster, worst they’d ever seen! I played a really bad show in Lawrence, Kansas, once. I was in a bad way, mixing pills and alcohol, and played poorly and forgot a lot of lyrics. I think I sang the same verse two or three times in one of our songs. That is one show, maybe the only show, I truly regret.

I used to be a projectionist and I liked that job a lot. I’d love to run an old cinema, maybe someday I’ll have the chance to get involved with one. I waited tables for a few weeks once and absolutely hated it. Wouldn’t want to do that again. Because of that experience I always tip well. To get less than a 20 percent tip from me you’d have to do something like spit in my food right in front of me.

I heard that the band Deer Tick went to Fun-Plex once.