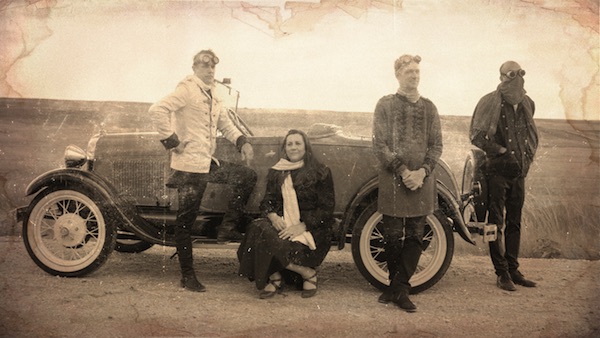 “Devotchka” is a Russian word for “girl,” according to Wikipedia, whereas DeVotchKa is a Denver four-piece fronted by brassy crooner Nick Urata. The band’s history dates back to 1997 and 11 studio albums including their latest, This Night Falls Forever (2018, Concord Records), a romantic collection of lush ballads that, on tracks like “Done with Those Days,” and opener “Straight Shot” sees Urata channeling such vintage vocalists as Roy Orbison and Chris Isaak.

“One common thread in these songs is their sentimentality,” Urata says. “When you first discover rock and roll, that’s usually the same time you’re discovering girls or boys, when everything is so romantic and huge — that era of your life is where these songs are coming from.”

We caught up with Urata and gave him the Ten Questions treatment. Here’s eight of his answers:

Nick Urata: Revolver by the Beatles. Every song on it is a classic and in a genre of its own. The moment I heard it I knew I had to make music.

I’ve always wanted to be in a band. I’ve been in so many that fell apart when you find one that works it’s like magic. To have brothers and sisters in music, to share the peaks and valleys of this life is a blessing.

“Hate” is a strong word, but if you’re serious about your band it takes over every aspect of your life.

There have been a few.  When we look back it turns out our home town of Denver is the sight of some of our worst disasters. Mostly because that’s where we cut our teeth and learned how to put on a show. It’s always the ones that you think are going to be earth-shattering that are the biggest let down. For us early on we were asked to open for Marilyn Manson, we were elated, but the reality was a harsh one. I thought his fans would be enlightened and open to something different, but the diehards up front hated us and made our first arena show a nightmare, it was also the day GW got re-elected, very dark…

It goes back to my previous answer: If you are willing to give up any semblance of a normal life you can eventually quit your day job. I’m happy to report we all have.

I would love to be a cinematographer, but I’m not sure I can even spell it so I guess that says something, but I think the fact that we can capture our world in such a beautiful light is a miracle we take for granted and future dystopian generations will cherish.

On the flip side, anything around an airport or church.