Home » Music » Ten Questions with Eros and the Eschaton 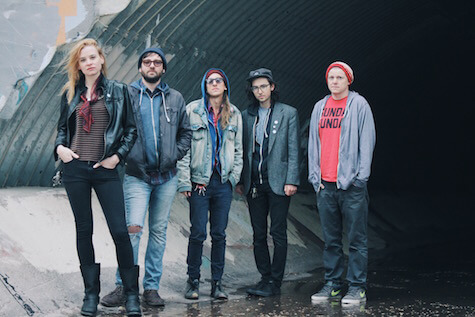 Colorado Springs shoe-gaze band Eros and the Eschaton got its start right here in Omaha. At its core are former Omahans Kate Perdoni and Adam Hawkins. Hawkins used to be a regular on the city circuit, playing under the name It’s True. Perdoni and Hawkins joined forces in 2012, and then hit the road to Greensboro, North Carolina, before releasing their debut album, Home Address For Civil War (2013, Bar None), a record that earned 3.5 starts from All Music, which called it a “warm, delirious product of two creative souls deeply in love.“

Three years later and Eros and the Eschaton now live in Colorado Springs, have expanded to a five-piece band and just released their sophomore album, Weight of Matter (2016, Bar None), which is just as shoe-gazey and ethereal as the debut without losing sight of its gorgeous melodies.  Though there are moments of rhythm and grit, at its core Weight is a collection of hazy, cloud-covered songs you very well might hear in the background upon entering those pearly gates.

We caught up with Eros and the Eschaton’s Adam Hawkins, who graciously answered our Ten Questions survey. And since he’s a former Omahan, we gave him a bonus round.

Adam Hawkins: Right now it’s a tie between Electric Warrior and The Slider.

“My Brother Thinks He’s A Banana”

I love my fat Spotify checks. I almost have enough to replace the hood on my 2000 Toyota Avalon.

All of them, unless they suck.

Kearney. I also played great shows there, but this particular show was the worst. I was playing solo. It was a packed show. I was just starting out. I started playing and nobody cared. Usually you at least get a minute or so where everyone quiets down before starting their conversations again. But I said, ‘My name is Adam Hawkins, and I am It’s True,’ and nobody even turned to the stage. Nobody even gave me a courtesy clap after any song. After the third song I threw my guitar across the stage and just screamed the lyrics to the rest of my songs.

i record bands and make pizza.

At one point, I was considering going to school to be a counselor. I couldn’t do the nurse thing. Too much poop and blood.

11. What do you miss most about Omaha?

I miss my buddies. Although most of them don’t live their anymore. I miss the music scene. I miss having so many cool places to play shows and go to shows.

I don’t miss playing a show on Husker game day.

13. What was the best part about making Weight Of Matter?

14. What was the toughest part about making Weight of Matter?

15. What do you hope to bump into when you return to Omaha, and what are you going to tell him/her?

There are too many to list. I’m hoping to see as many of my old buddies as possible so I can pretend I don’t recognize them.

Eros and the Eschaton plays with Lonely Estates and Edison & the Elephant Friday, Sept. 16, at Reverb Lounge, 6121 Military Ave. Tickets are $8; showtime is 9 p.m. For more information, go to onepercentproductions.com.