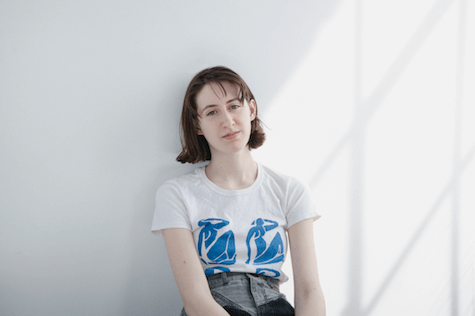 Frankie Cosmos is Greta Kline, a NYC singer/songwriter/rocker who writes, sings and performs heartbeat-powered indie rock that recalls the best of K Records. That’s a shorthand way of saying her music is mostly quiet soul-searching personal love songs with a kick deftly supplied by a first-rate band that includes Aaron Maine of the band Porches.

It should be added (for the record) that Greta is the daughter of Kevin Kline and Phoebe Cates, which, one might say, doesn’t matter, but let’s face it, it does. You can’t grow up in that house surrounded by those people without having some talent rub off on you. It also shouldn’t matter that Pitchfork gave her latest album, Next Thing (Bayonet, 2016) an 8.5 rating and a “Best New Music” designation, but it does, because, let’s face it, lots of people read Pitchfork. All of this is part of the reason Sunday night’s show at Milk Run is sold out (that, and the fact that Milk Run is only slightly larger than my closet).

We asked Frankie a.k.a. Greta to take our Ten Questions survey and here’s what she had to say:

Frankie Cosmos: One Foot In The Grave by Beck

I don’t usually listen to music that I don’t like so I don’t really know, but we listened to “Hoes in My Room” by Ludacris in the car today and it was pretty awful.

Connecting with my bandmates when we play together.

Getting sick or feeling emotionally drained on tour sometimes.

No such thing as a bad gig. Our weirdest ever was in Fargo ND but it was still awesome.

Touring, and selling records and stuff.

I’d like to attempt teaching. I would hate to be an astronaut cause it’s like touring times a zillion (in terms of being away from home and out of ur element)

Yo I heard that Anna McClellan is from there. That’s a pretty good story.