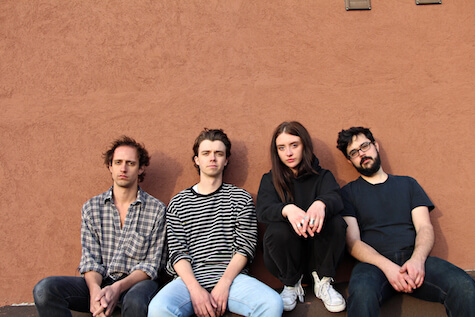 Toronto 4-piece noise punkers Frigs (formerly Dirty Frigs) play a dark, growling, acidic style of indie rock that either chugs angry and hot, or drags lethargically like a Robitussin-fueled nightmare.  On the band’s debut EP, Slush (2016, Arts & Crafts) the fast ones showcase front woman Bri Salmena sounding like a young Shirley Manson or Polly Jean Harvey as the band cranks like the reincarnation of Elastica. On the slower tracks, it’s all guitar chimes under water, backed by hypnotic, throbbing drums and Salmena spitting out the vitriol.

Bri Salmena: I hate this question because it changes, right all I want to listen to is Post Plague by Odonis Odonis.

Bri: Anything by Elvis Costello

Edan:  Anything by Janet Jackson

Bri: Edan you are insane.

Bri: I think if the answer isn’t playing music something is wrong.

Edan: Feeling cool and getting attention.

Bri: I don’t really hate anything about being in a band…

Bri: Ummmm Pepto Bismol. It helps me tolerate all my favorite “other” substances.

Bri: Hometown shows are always fun, but it’s also nice to perform in front of a bunch of strangers. There is a certain amount of freedom for me to be as weird as I want. But i don’t really have an answer to your question.

Bri: Hmm, not sure. I feel like our first show in London, England, was pretty brutal. We had a lot of technical difficulties that made it really hard to play, but everyone was really nice.

Bri: I studied Art History and want to go into art restoration if music is a bust. I would hate to do my job now as a real “profession” (sorry Mom, it’s just not for me!).

Edan: I’ve always dreamed of being an architect. I would hate to work in a hospital. I cant stand blood or guts or cuts or veins or stuff, ew.

Bri: I really like that song “Omaha” by Waylon Jennings, and I’ve heard really great things about Nathan Ma, the guy who booked us 🙂

Edan: Only the ones told by Bruce Springsteen on the album named after your glorious state.