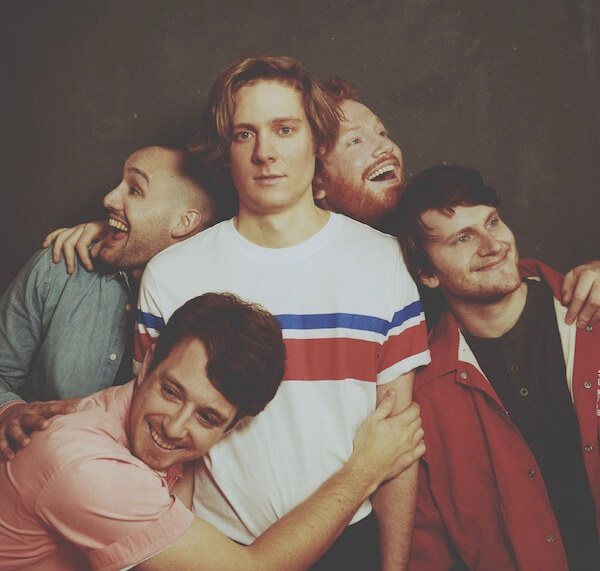 Brooklyn indie band Future Generations was trying to get their heads around their changing world on their sophomore album Landscape (2018, Frenchkiss). “The title partly came from ending the first significant relationship of my life, and with the band’s move to Brooklyn, we were all put into this world we’d never experienced—living on our own and navigating the landscape of being in New York City,” said frontman Eddie Gore.

We caught up with the band and gave them the ol’ Ten Question treatment. Here’s what they said.

*Band note* This was done in the van on the way to Indianapolis and later to Omaha, with Devon dictating and transcribing questions and answers.

Dylan Wells: Kid A by Radiohead

Mike Sansevere: I gotta think about it. You can probably just put Donuts by J Dilla for me. It’s a played-out answer, but that’s probably it.

Mike: Ohhhh yeah that song sucks (Dylan and Mike fist bump). Might have to second that.

Eddie: Whatever that “Thunder” song by Imagine Dragons is.

Eric: I don’t know what are some bad songs?

Eddie: Getting paid to hang out with my friends.

Devon: I’m with Eddie. I also just like putting good energy into the world via music. Always thought it’d be so cool to do that.

Eric: The stress of being in a different place everyday. I like being in my own bed.

Eddie: I don’t really hate anything about being in a band.

Devon: I hate the always nagging feeling of never feeling like you’re doing enough, either creatively or professionally, for the band. Even if it’s not true.

Eric: You can say butter.

Mike: You can put down water for me.

Dylan: Baltimore, because I fell out of my drum throne.

Eric: There was a hectic show in D.C. where my pedals didn’t work. It was with Mt. Joy earlier this year.

Eddie: We played the wrong venue in Alabama a couple years ago. That was bad.

Devon: Not quite yet, but getting there. Mostly we all bartend and work in the service industry to varying degrees. We all love and appreciate food, and it keeps us flush when we’re not touring. Mike does royalties for labels.

Dylan: I would want to work on a winery; would hate to do an office job.

Eddie: Food critic. I’d hate to be a music critic.

Eric: Would love to work and office job; would hate to work on a winery.

Devon: Would love to do criminal defense law; would hate to be a gun manufacturer.

Mike: Warren Buffett. And they got a Whole Foods by the hotel.

Eric: All I know is Omaha Steaks.

Eddie: I don’t know anything about Omaha.