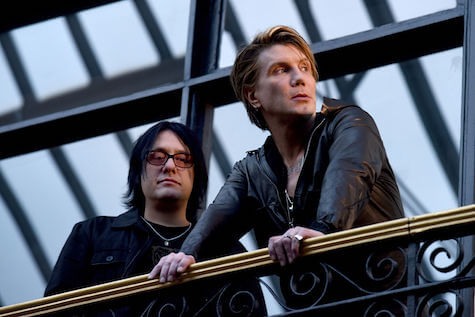 The first time I heard the Goo Goo Dolls was way back in ’92, after staying up late on a Sunday night to watch 120 Minutes on MTV. When the video for “There You Are” came on, featuring Goo Goo vocalist John Rzeznick doing his best Paul Westerberg-style crooning over a punchy, punky power chord, I was intrigued.

It was the band’s first video, and pretty much summed up their indie punk-rock sound and style — three average Joes running around an empty Buffalo, New York, baseball stadium, smiling for the camera without a care in the world.

But six years later, Goo Goo Dolls were a different band. Riding the success of their million-selling 1995 album, A Boy Named Goo, which featured the smash ballad, “Name,” Goo Goo Dolls went on to record the most played song on radio in 1998, “Iris,” the theme from the Nick Cage/Meg Ryan chick flick, City of Angels. It netted them three Grammy nominations and a first-class ticket out of the smoky punk bars and into sold-out arenas.

With the release of their latest album, Boxes (2016, Warner Bros), the Goo Goos are trying to change course once again. Rzeznik and co-founder/bassist Robby Takac hired a stable of writers in an effort to push themselves past their comfort zone. The product is a collection of king-sized alt-rock anthems that are a perfect fit for Stir’s Cove’s outdoor concert space, where the band performs Friday night.

We threw the Ten Questions gauntlet down on the Goo Goo Dolls, and Robby Tatac breached it with the following answers:

“The Weight,” by The Band

The completion of the song cycle you experience at live performances.

Being away from my wife and daughter.

They’ve all been perfect …. of course.

8. How did you pay your bills back when the band was just getting started?

Worked at a flower shop, was a DJ, spent lots of time recording punk rock bands, was a barback & bartender, spent some time as a stage hand ….

I would like to own a Pez museum. I wouldn’t want to be a cop.

I was there once and it was so hot cows were exploding ….. no lie.