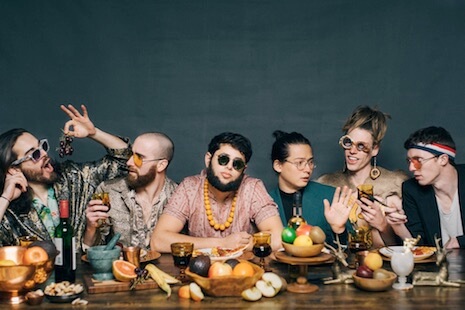 Being the self-proclaimed indie music snob that I am, I typically would never have discovered Joe Hertler & the Rainbow Seekers. I mean, the Michigan-based band has been classified in the jam band / funk / pop category, has counted major label Universal among its distributors. and has been known to perform in Hawaiian shirts. That’s about as far away from “indie” as it gets.

But after receiving multiple emails from their publicist, I watched the video for the single “Lonely” off their Kickstarter-financed latest release, Pluto, and found myself tapping my toe. When I read via Wiki that Hertler started the band in an effort to get the attention of a girl who hosted an open-mic night, I was hooked.

Hertler was game to take the Ten Questions survey. Here’s what he had to say:

Joe Hertler: It’s basically impossible to pick my favorite, but off the top of my head, maybe Black Radio by Robert Glasper? Sgt Peppers and maybe Live in Verona by Jamiroquai are up there, too.

I love It, by Iconopop. My sax player uses it as a wake up song sometimes for the band when everyone’s been sleeping in the van and we’ve reached our destination. I really do not care to ever hear that song again.

Obviously playing music is super fun, but the adventure of tour with my bandmates (and getting to visiting and reconnect with friends and family in distant locations) is ultimately what makes it the most meaningful.

It can be stressful at times, but honestly we have a pretty damn good time playing music together and keeping each other in good spirits. It’s important to be aware of your emotions and the emotions of others. It’s also just as important to take care of yourself, you know, like exercising, eating decently, sleeping, and doing fun shit that doesn’t have to do with music, like hiking, site seeing, etc. If you’re aware of how your behaviors affect your bandmates, then really, there’s really not too much to hate. You gotta embrace all aspects of band life.

We had a sound system take a shit on us at a gig in Ashville. This was also after the promoter moved us to their rave cave room because there were issues with original room we were going to play. The heat went out, too, so it was like 50 degrees in the venue. Made for kind of a rough show. Honestly, though, we don’t really have bad shows. We tend to get pissed and nit-pick over little fuck-ups, but being critical of oneself is just part of it. Certainly doesn’t determine whether a show is good or bad. As long as the crowd is engaged, which they always seem to be – that’s what makes a show good.

Yep! We do various side hustles, but for the most part we support ourselves through music. Aaron is an ex-engineer and part-time chainsaw carver. I used to be a teacher. Micah and Ryan do some work for our producer’s company on the side, and Rick makes giant mechanical wooden clocks.

I would love to make horror movies!

Joe Hertler & The Rainbow Seekers plays with Here Come the Mummies Thursday, Feb. 22, at The Slowdown, . Tickets are $22 Adv/$25 DOS. Show starts at 9 p.m. For more information, go to TheSlowdown.com.