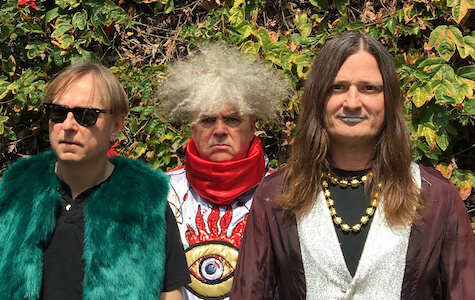 What can I say about Melvins? The band whose sound influenced all things heavy — from grunge to stoner to alternative metal — has been playing their brand of grindingly hard rock for more than 30 years.

The list of bands influenced by Melvins is a Who’s Who of modern metal, from Mastodon to Sun O))) to Queens of the Stone Age, and, of course, Nirvana. In fact, the story goes that Melvins’ guitarist/vocalist/madman Buzz Osborne (a.k.a. King Buzzo) introduced Kurt Cobain and Krist Novoselic to Dave Grohl. It was Nirvana’s unexpected success that helped get Melvins signed to Atlantic Records, who released their masterpiece Houdini in 1993.

Now 23 years later, Melvins will release Basses Loaded June 3 on Ipecac. The record features six bass players including Steve McDonald of Redd Kross and OFF!, who will be playing alongside Buzzo and Dale Crover when Melvins play The Waiting Room Monday, April 25.

2. What is your least favorite song?​

3. What do you enjoy most about being in a band?​

I’m in it for the chicks.

5. What is your favorite substance (legal or illegal)?​

6. What city or town do you love performing at?​

7. What city or town did you have your worst gig (and why)?​

10. What are the stories you’ve heard about Omaha, Nebraska?​

I hear they have really good steakhouses and excellent topless bars​.