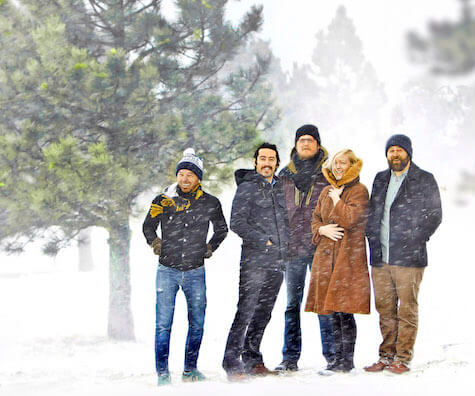 Research for this article was my first introduction to Murder by Death, though the band has been kicking around since 2000. My wife and I listened to Bitter Drink, Bitter Moon (2012, Bloodshot) all yesterday afternoon, enraptured by the album’s gorgeous cinematic style — consider it spaghetti western outlaw folk. I was reminded of Decemberists and Johnny Cash as well as Silver Jews, Morphine and Elvis Perkins, though the Louisville-based 5-piece has a unique sound all its own.

Their latest album, Big Dark Love, came out in 2014 on Bloodshot, which tells me they’ve got to be due to release something new. Maybe we’ll get a peek at the new stuff when they play at The Waiting Room Wednesday night.

Pretty much anything Top 40.

The “hurry up and wait” aspect of touring. Never getting enough sleep, then hurrying to the venue, where you sit around waiting to play.

Hmmmm. We had a crazy one outside of Charleston, SC, where the club was falling apart and the cops came. It got pretty bananas.

Yes, have done so for 13 years (some better than others!). Took a couple years, but we didn’t make much, and lived modestly. We also stayed on the road constantly during that time to keep down expenses and stay busy.

I love food, I want to open a restaurant — it involves a lot of creativity beyond the food, from building renovation to decoration, spatial creativity and an awareness of people. I would hate to be a politician.

We have probably played in Omaha over a dozen times, maybe more. My best personal story was when we were driving from Omaha to Denver, and a snowstorm shut down all the highways. We had to stop in Kearney, NE, but all the hotels were booked up, so we had to stay at the National Guard Center, where we helped set up cots and hand out pizza. Then we watched Total Recall in our van, had a few beers, and went to sleep. Next morning our trailer hit some black ice, smashed into the guardrail and the walls of the trailer ripped right off. Managed to find a trailer shop a few miles down the road, bought a new one, and still made the show in Denver.