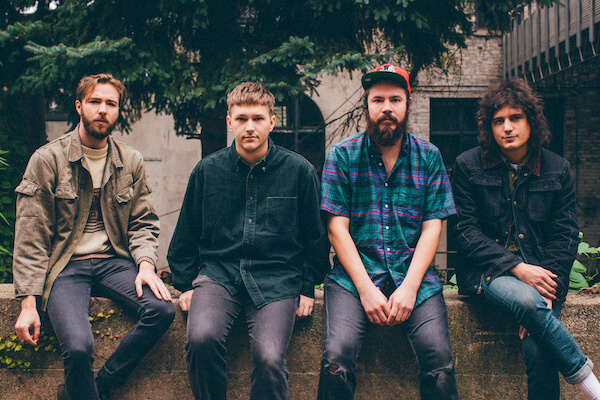 Jangle-buzz garage rock band NE-HI is the product the Chicago house show scene, emerging from a Logan Square DIY space called Animal Kingdom in 2013. The four-piece, fronted by guitarist/vocalist Mikey Wells, slowly crawled onto bigger stages on the strength of its live shows and the band’s self-titled 2014 debut.

The next thing you know, NE-HI was touring with Black Lips, Car Seat Headrest and Chicago bros Twin Peaks, including a swing through Omaha last June for a set at The Waiting Room that reminded me of Stone Roses circa 1990. Most of the tracks on the band’s follow-up, Offers (2017, Grand Jury), were recorded live in studio to capture their trademark house-show energy.

We caught up with frontman Mickey Wells and gave him the Ten Questions treatment:

Mickey Wells: My favorite album right now is the first Ramones album. I hadn’t listened to it in a long time and i forgot how cool and funny the lyrics are.

My least favorite song of all time is “The Long and Winding Road” by the Beatles. It’s both long and winding and is sentimental crap.

I really enjoy playing the shows and going to different towns and meeting new people and making friends. It’s a cool way to see the country.

Either coffee or the weed honey I put in my coffee. The lines are blurred!

I like Atlanta a lot. Good food, nice people and it’s usually a fun crowd.

In NYC our first time we played there we drove a super long time and then played in a coat closet and the sound person kept telling us to turn down the whole time. That was a bummer.

Kind of half and half. We make some money playing music but we also all have jobs at home when we’re not touring.

Maybe some sort of writer or painter. But a successful one haha.

I’ve heard about the legend of infamous Omaha omega swamp monster. It supposedly roams the night in search of touring musicians and rats to eat!