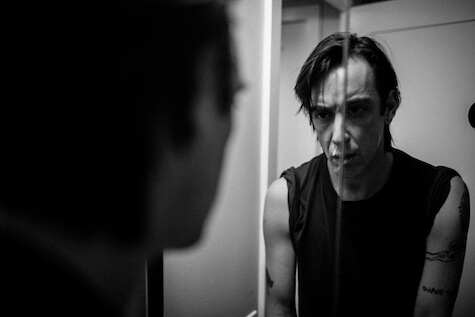 Operators is helmed by Dan Boeckner, who you might remember from Wolf Parade, Handsome Furs and Divine Fits.  His new trio includes drummer Sam Brown (New Bomb Turks, Divine Fits) and synthmaster Devojka, who (along with Boeckner) provides all those glowing dance tones. Those looking for local comparisons, Boeckner’s vocals have always reminded me of Eli Mardock’s (or Mardock’s reminded me of Boeckner’s), while the music has the same acid-buzz that Icky Blossoms’ fans will recognize (and love).

When it came time to make their debut full length, Blue Wave (out this Friday on Last Gang Records), the band brought in the big guns in the form of producer Graham Walsh, who’s worked with METZ, Alvvays and Viet Cong, among others. The record is an uplifting rock album that as a whole recalls classic ’80s good-time new wave dance music as embraceable as your favorite John Hughes movie.

We asked Boeckner to do our Ten Questions, and he responded with gusto.

The Body – No One Deserves Happiness

“Blood On The Leaves” – Kanye.  Kanye takes one of the most brutally effective, devastating,  righteous political songs ever written (Strange Fruit)…and turns in into an allegory for not wanting to pay alimony.   And something about courtside seats.

“Sexy Mexican Maid” – Red Hot Chili Peppers.  Weapons grade bad.  The ’90s were a time where you could spot weld casual racism to ham-fisted tuneless funk metal and be applauded for it.  Here, look: https://www.youtube.com/watch?v=bEf_Wfqou3I

Playing shows and the ability to travel.  Playing shows because, it’s a transcendent experience.  I’m not a spiritual guy but…being onstage and playing music, transmitting something to an audience, having that catharsis…that’s a blessing.  It’s a lucky thing to get to do.  Travel because I grew up in a tiny, rural town in Canada in a low income family and had no real prospects for getting to see the world.  I could read about it and look at it but it was unavailable to me.

Any time I feel like being in a band is a burden I think about playing shows, the fact that I get to travel and the fact I’m not telemarketing or working demolition or being a line cook and those feelings just…melt away.

Probably Kaunas, Lithuania.   I played a Russian owned mafia club.  Halfway through the set, the security tasered a guy for dancing and threw him down a flight of stairs.  After the set was over, the promoter leapt onstage and gave a 5 minute speech in Russian and Lithuanian, the main theme being: the band would play his favorite song.  We did not know how to play his favorite song.  He like…kind of sprung that on us.  So: he kept us onstage and encouraged us to MIME that song while the mobbed up club “investors” got drunker and angrier.  Later in the evening he got apocalyptically wasted in my hotel room and told me how when he was in the Soviet Navy he almost died in a nuclear submarine accident.

If I wasn’t doing this, I’d probably be doing journalism or working for a foreign intelligence agency.  Hate to do: my old job working for a pharmaceutical company.

The one about radioactive “Fukushima” bees.

The one about the salt witch.

The one about how tackling Steven Malkmus of Pavement mid set at Slowdown while you’re wearing a “Tricerasquatch” (Sasquatch body-Triceratops head) costume will only make him pissy and not just laugh at the sheer ridiculousness of the situation and then high five you like you thought it would.