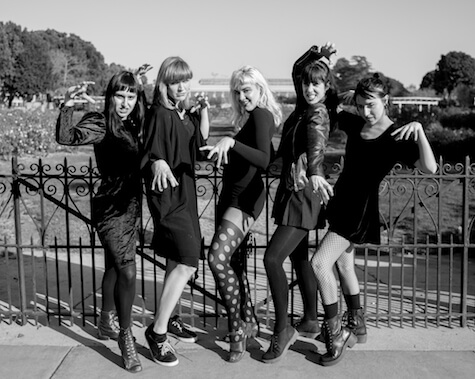 Peach Kelli Pop is Canadian Allie Hanlon and four other women playing jangling, abrasive, driving straight-four beach-flavored punk rock that sounds like go-carts and too much coffee. On the blink-and-you’ll-miss-it LP, Peach Kelli Pop III (2015, Burger Records), Hanlon and her band race through 10 songs in just over 20 minutes — simple math tells you that averages about two minutes per song, just long enough for punk rock. Popular themes are video games, Chinese food and conspiracy theorists as well as the usual songs of love.

We caught up with Hanlon and asked her to take our Ten Questions survey. Here’s what she had to say:

“(You’re) Having my Baby” by Paul Anka

Tokyo, Japan will always be #1.

Our shows in Nashville have sucked the last few years, so we stopped playing there. On tour in Europe last fall, we played a show in France where we were playing on the floor, with some drunk, confrontational people inches from my face during our entire set. They spilled beer all over my pedals. I don’t condone violence, but I was ready throw down.

Usually via credit card over the phone.

Canine massage therapist or a psychic. I think I’d be a great aerobics instructor as well. I would hate being a meter maid or having any profession involving sales.

Growing up in Ottawa, Canada, I didn’t know anything about Omaha, NE. I learned about Saddle Creek Records and its bands, which were really influential when I was a little teen, and became more familiar. The rich music history makes Omaha stand out. I also heard that 311 is from Omaha which is pretty cool.

Peach Kelli Pop plays with The Way Out Wednesday, May 25, at Reverb Lounge, 6121 Military Ave. Tickets are $8, showtime is 9 p.m. For more information, go to onepercentproductions.com.