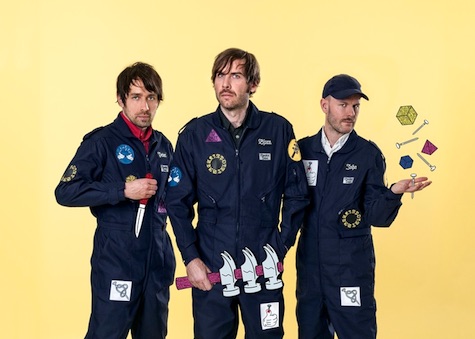 You might know Swedish indie pop musicians Peter Moren, Bjorn Yttling and John Eriksson — Peter Bjorn and John —  from their 2006 whistle-hook classic “Young Folks.” The song has more than 66 million spins in Spotify alone and was a hit in Europe and the U.S. before Spotify existed. Believe me, you’d recognize the song if you heard it. After a five-year recording hiatus, the band is back with self-released LP Breakin’ Point (2016, INGRID), a collection of bouncing pop songs that sounds like what you’d get if Belle and Sebastian cross-pollinated with ABBA.

We asked the band to take our Ten Questions survey, and here’s how the trio collectively responded, presumably in unison:

In Stockholm, Sweden 2002. We were booked as the opening act on an outdoor festival and when we got there they told us we had to build the stage ourselves. When we, after two hours, played the first song it was totally out of tune since Peter had forgotten the tuning pedal in our rehearsal studio. Then it started to rain.

With a twisted smile.

I would like to try to be the writer of a very short book.

I would not like to be a bee keeper.

I have heard that Bruce Springsteen was there at some point. Don’t know what he did though.

Peter Bjorn and John play with All Young Girls Are Machine Guns Sunday, June 26, at The Waiting Room, 6212 Maple St. Tickets are $20, showtime is 8 p.m. For more information, go to onepercentproductions.com.