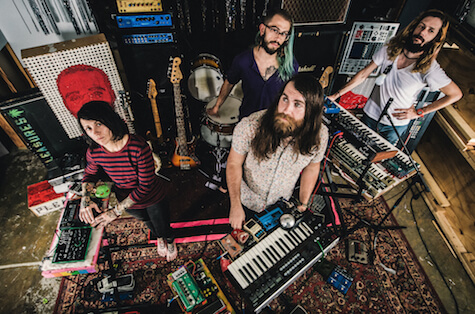 But one of the stranger things out of Florida “in a good way” is PLEASURES. The Sarasota four-piece describes their sound as “sex music for robots” and “psychedelic/synthwave fagcore.” Cool blog Creative Loafing called them “demented surgeons on a quest to create some kind of new sonic Frankenstein” when they awarded them “Best Sci-Fi Psychedelia” in the annual Best of the Bay awards.

I’d describe them as “psych-fueled late-night dream-rock” and “the perfect soundtrack for any John Carpenter hero-epic,” especially songs off their new album Fucked Up Dreams Come True, like “Man Is a God in Ruins,” which just sounds cool and weird. But there’s a lot of weird stuff that happens in Florida.

Dealing with people’s perceptions of people who are in bands.

Toss up between NY and Los Angeles. Because ehh who cares?

Serving tables, painting and contracting work, and the band.

I’d like to be a novelist or an elder care companion. I’d hate to manage a restaurant.

1, Conor Oberst is a hologram. 2, They like their breakfast burritos “Omaha style” – cream cheese on the tortilla.