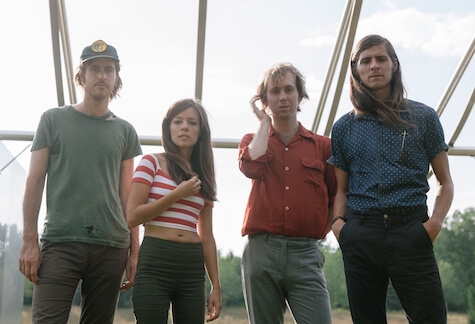 Quilt’s latest album, Plaza (Mexican Summer, 2016) has the distinction of being my favorite record from Q1 2016, hands down.

The 10-song opus is a throwback to a time when records were complete collections of great songs instead of the usual tossed-together block of ethereal “vibe” noodling. The four-piece that hails from Boston has a modern take on psych rock that gives nods to ’60s-’70s acts like The Byrds and Fleetwood Mac. They sound as if Quasi had sex with The Shins and gave birth to a smarter, more fit, more tuneful version of Of Montreal.

The above description is selling the record short. I know, I’m gushing now. So what! How they’ll reproduce the dense, intricate arrangements (that includes a string quartet, harps and, yes, flutes) on stage at Reverb Lounge this Thursday, March 31, is a mystery. But I’m sure they’ll figure it out.

We asked Quilt to take our Ten Questions survey, based on the Pivot Questionnaire that caps off each episode of Inside the Actors Studio, but with a musical (instead of an acting) focus. Here’s what drummer John Andrews (also of the band Woods) had to say:

Quilt: That’s a hard question to answer but I always just say The White Album by The Beatles. I’ve been listening to it since I was an actual baby and I’m somehow still not tired of it. It has a little bit of everything.

I used to work in a Salvation Army in Lancaster, PA, and they only played the contemporary country station. I don’t know any songs in particular, but that stuff is so bad. That’s not country music.

I love those late night drives on tour through the middle of nowhere when everyone else in the van is asleep and you’re truckin’ down the highway listening to good tunes. Right now we are driving through New Mexico. It’s a beautiful landscape. “Wasn’t Born To Follow” by The Byrds is my current favorite driving song. I always just wanna be in that scene in Easy Rider.

Smelling my bandmates fart in the van.

I’ve been lucky enough to play with my other band Woods at Woodsist Festival for several years in Big Sur California. There’s nothing better than playing outdoors under the redwood trees.

We’ve played a lot of bad shows it’s hard to remember the worst. A story that comes to mind is from Denver, Colorado, when some lady was freakin’ out on drugs or something and was messing with our equipment on stage. She was grabbing the mics on our amps and kept messing with things on our merch table. The show wasn’t all that bad but it’s just a good example of the crazy people you meet traveling. We call them punishers.

Dream jobs are: park ranger, camera man for the NHL, mailman, animator for The Simpsons.

I heard Simon Joyner has an antique store?