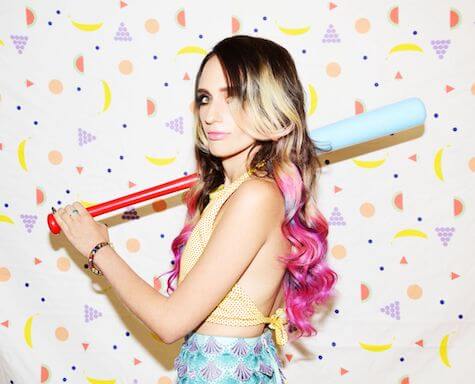 Sad13 is Sadie Dupuis of Speedy Ortiz out on her own doing the solo thing; and when I say “solo” I’m talking solo-solo: Dupuis wrote, sang, played guitar, recorded and produced her recently released solo debut, Slugger (2016, Carpark), all by her lonesome.

I don’t know who Lindy West is other than being a good writer. She had this to say about Dupuis’ new record:

It’s very strange (“Or not strange at all! Hi!” says feminism) that most of the music we funnel into little girls’ ears — even music written by former little girls — is about how women are petty, pretty garbage whose only valuable function is to hold perfectly still in men’s boudoirs and wait for intercourse. “I wanted to make songs that were the opposite of ‘Genie in A Bottle’ or ‘The Boy Is Mine,’” Sadie Dupuis says of Slugger, her new solo album under the name Sad13. “Songs that put affirmative consent at the heart of the subject matter and emphasize friendship among women and try to deescalate the toxic jealousy and ownership that are often centered in romantic pop songs.” What!? Songs for women that actually champion women’s autonomy, reflect women’s desires, listen to women when they talk, and let women be funny and normal and cool, like women actually are?

Indeed. Lindy references Tacocat, Waxahatchee, Mitski and Bully in the comparisons. I’ll add early Liz Phair and Eleanor Friedberger to the list. And, of course, Speedy Ortiz, who Dupuis doesn’t stray too far from musically.

I asked Dupuis to take my 10 Questions Survey. Here’s what she had to say:

Sadie Dupuis: I am very skeptical of musicians who can definitively name *one favorite album* but Helado Negro’s Private Energy and Solange’s A Seat At the Table are probably my favorite albums released this season.

R. Kelly “Ignition (Remix)” because I fucking despise R. Kelly but the beat is good and I always accidentally wind up dancing to that before I realize what it is.

All the free water bottles and hummus backstage.

How it’s changed my perceptions on hummus.

On our first tour Speedy Ortiz played in Missoula and 0 people showed up aside from the promoter. So we just had a noise jam by ourselves in a VFW.

Music’s the day job and covers my basic living expenses but I’m not really raking it in and have to spend almost all of the year on tour or recording music in order to make it at that level. And I definitely take on lots of odd gigs here and there. I quit my day job in 2013; I was 25 years old. And I’ve been playing in bands since I was 13 or 14, which is around the same time I got my first job.

I taught at UMass Amherst prior to touring full time. Would do it again! Worst job for me would be anything that supported the prison industrial complex.

I’ve been quite a few times. Y’all have some really great bloody marys.