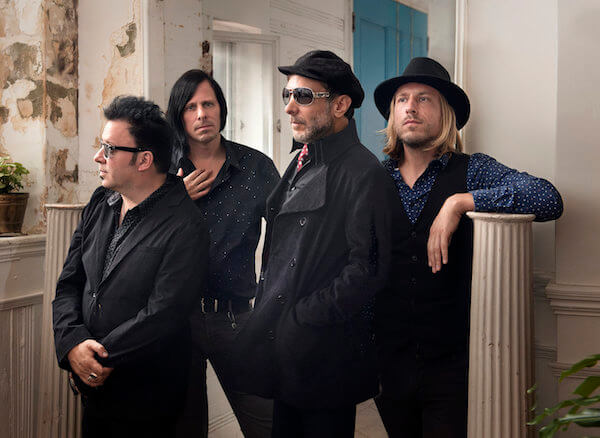 Tears of Silver is an indie supergroup that truly lives up to that designation. It consists of Posies’ founding member Ken Stringfellow, who’s also played in Big Star and R.E.M., along with three members of Mercury Rev — Sean “Grasshopper,” Jonathan Donahue (Flaming Lips) and Jesse Chandler (Midlake).

The band is touring America playing “unconventional venues,” which are announced 48 hours prior to each gig. Think of it as a “secret show” tour. Omaha’s hidden venue is at the not-so-secret Hi Fi House Monday, Oct. 2.

According to the Tears of Silver website (where you can acquire access) “The evening will be a chance to enjoy the modern classics from each artist’s long history as well as some new music they have created for the occasion (and certainly cover songs beloved to them repurposed and retooled for this tour). This is the first time Mercury Rev’s music has been performed in many parts of America for nearly a decade.”

Below, my Ten Questions with Ken Stringfellow and Sean “Grasshopper”:

Ken Stringfellow: I’m too curious to really return to a reliable favorite. I’m always hoping to hear something unexpected and refreshing. Also, at any one moment I have something I’ve recently worked on that I’m proud of and I definitely give a few victory lap listens. This week, it’s the Supercalifragile album by Game Theory I produced. How can I summarize… Game Theory was a wonderful, brainy, exuberant band from the 80s… one of the classic ‘college radio’ bands. I was a fan then, and over the years befriended the band’s mastermind, Scott Miller. He had contacted me about rebooting the band after nearly 20 years, but unfortunately took his own life before this album could be completed. It was up to me to see it through; some songs were partially completed that I was able to finish up and mix; other songs were just fragments of ideas on various hard drives/phones and needed to be finished from the composition to the final mix… to this end I gathered some of his close friends and colleagues that he’d already hoped would have been involved in the album — Aimee Mann, Will Sheff, etc… and we delivered what I think is a stunning album, very true to Scott’s intentions as best as we could know them. It’s out now: https://gametheory1.bandcamp.com/

I woke up today thinking about “Holding Out for A Hero.” It makes zero sense. It’s so typical that this song was written by men, and humiliating that a woman had to sing these preposterous words, that bear no resemblance to anything that I can see in the reality of human relationships.

Time away from them! If it’s my long time band. I mean, it’s also lovely what a band and its music can mean to people over time. Being that we are celebrating the Posies’ 30th anniversary next year… it’s lovely to have a community that shares the appreciation for the years of work and the results of the music.

I don’t think I hate anything about being in a band, temporary (like this assembly for this tour)  or long term (like the Posies). The Posies has been, for example a motivating factor in making me work out issues with my bandmates. If we didn’t have a legacy to uphold, I might have ended these friendships. So, in the short term, I hated being stuck with someone with whom I was having a conflict, but ultimately, it made me work to resolve it rather than abandon the relationship.

I basically have beatlemania for fresh figs. I’m quite passionate about wine, too, and have a pretty decent cellar in Seattle, and another one in Paris, another in… etc.

Well, Seattle is always special, it’s ‘home’ in many ways, still. I have to say, tho, that there are places that have adopted me, too … I feel very ‘home’ when I play in Helsinki, or Barcelona… my shows in and around Barcelona are pretty amazing, in terms of the audience’s openness and love. And then all the stuff around it — the sunshine, the wonderful food and wine, the Mediterranean… and these relationships just keep growing with the years… the more good experiences I have with an audience, the better the *next* show is likely to be… it’s about building trust and good experiences.

Hmmm. Have to  be careful here! I had a pretty weird show in Hamburg, years ago, before I really perfected the art of managing being onstage alone. The club was scuzzy, the audience small, and I was insecure, and let that take over. I couldn’t really complete the show, I started to think nobody there cared etc…  it was awful. No fault of Hamburg, had plenty of great shows there since. It was just where I was at at that point in my life and in my learning curve about being a solo artist.

I like to say I have been unemployed since 1989. I am loathe to think of what I do as a ‘job.’ It’s really more a continuing flow of miracles, and there’s always enough money to get what I need in life. I basically took a leap of faith at that moment in 1989, when I was 20, to not have a job per se. I starved, until I didn’t. What was important was that I retooled my focus on making my music and my communication the best it could be. It’s still how I think.

Well, I was very interested in natural sciences; I could have been a biologist, perhaps. I am quite squeamish about human blood and tendons so pretty sure orthopedic surgeon would be hell on earth.

Well, there’s that whole menage-a-trois thing that Warren Buffet had going, right? it’s pretty fascinating, and I’m sure there are many more tales that all locals know, but… I had to hand it to them for being so open about it. I know, I know, billionaire, so people will say yes to whatever, but … it *sounds* like there was much respect and openness to let that situation be what it was. You tell me!

“The Farmer In The Dell”

The smell of gasoline exhaust in the morning.

The smell of gasoline exhaust in the evening.

In Las Vegas, Nevada, because I’ve never played a gig there.

I’ve generally been able to support myself through music for 20 years. When times are good I’ve fed the ponies, during tough times, they have given back…

I would love to be a jockey. I have the height, but I don’t think I could make the weight. I’d hate to be a proctologist.

Tom Waits – “A Christmas Card From A Hooker in Minneapolis.” The song’s protagonist mentions, in regard to Omaha:  “Everyone I used to know is either dead or in prison”