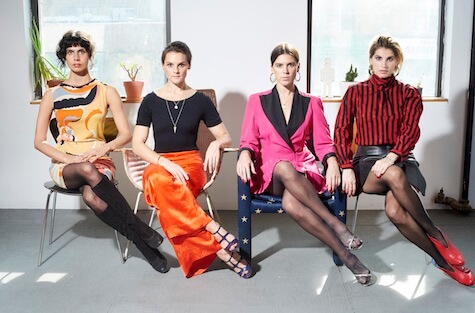 Brooklyn four-piece synth-rock band TEEN got its start in 2010 while lead singer/multi-instrumentalist Teeny Lieberson was still playing keyboards in Here We Go Magic. After recording and self-releasing the LP Little Doods, she pulled in sisters Katherine on drums and Lizzie on synths (Boshra AlSaad fills out the group on bass) and signed to Carpark Records for 2012’s In Limbo.

The band’s new album, Love Yes, is a slick piece of work that ratchets up the synths and beats to sonic levels matched only by the likes of St. Vincent. The album’s sound is wall-to-wall, so well-produced for a record apparently recorded entirely live, I have to wonder how they’ll reproduce it in the quaint confines of O’Leaver’s, where they perform Thursday night.

We asked TEEN to take our Ten Questions survey. Let’s see what they had to say:

If we hated it we wouldn’t be doing it, but we hate hanging out with each other

Sugar and wine and weed and whippets

Frankfurt – We played in an car dealership district, ate weird Chinese food and no one was there. But the two people who were bought records!

10. Have you been to Omaha before, and what are your impressions (or preconceived notions) of the city?

Yes! We think of wheat fields and Elliot Smith… We haven’t spent that much time in the city so we’re excited to come back and see more!