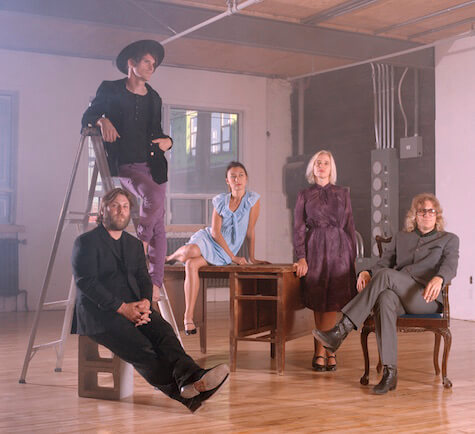 The Besnard Lakes’ music is so massive, so mammoth, it’s the sound you hear while teetering on the edge of a cliff with the gorge spread out in front of you, the river below a mere silver sliver among the rocks.  The Montreal-based six-piece is centered on the husband-wife core of Jace Lasek and Olga Goreas, who released their first studio album, Volume 1, in 2003 (but which was rereleased by their label, Jagjagwar, in 2007).

While the band is undoubtedly indie — Lasek’s and Goreas’ harmonies are reminiscent of Low’s Parker and Sparhawk — their gorgeously dense music has touch points in ’70s arena rock recalling bands like Yes and Boston, acts that knew how to make their anthems sound majestic. And most of Besnard Lakes’ new album, A Coliseum Complex Museum (2016, Jagjaguwar) is, indeed, majestic — a swirling miasma of beautiful multi-tracked sounds cut to the core by Robbie MacArthur’s sparkling guitar solos. It’s a sound so large one can only wonder how it’ll fit inside tiny Reverb Lounge Monday night.

We asked The Besnard Lakes to take our Ten Questions survey. Here’s what Olga had to say:

The Besnard Lakes’ Olga Goreas: Side two of The Beatles’ Abbey Road.

Anything that doesn’t come from a sincere heart.

Playing bass. I love that thing so much!

I really can’t complain about any aspect of being in a band. It’s pretty much the best job in the world. I don’t know, long rides in the van can get tedious I suppose.  I’ve got restless legs too, but I don’t think I can blame it on being in a band! Just gotta get up and stretch once in a while.

I do enjoy a well-made double espresso.  Caffeine is the one drug I could never give up.

Chicago has been a special city for us.  The audience is always super appreciative, and the city too is quite lovely.  The old architecture melds with the new really well.  I almost get a Canadian vibe from it too, more than any other American city except maybe Minneapolis. Also love playing Glasgow, London and just the UK in general.  Audiences seem to understand us best in the UK.

That honor belongs to Victoria, BC.  It had actually started quite well – we took a ferry from Tsawassen to Victoria and two of our bandmates at the time ran into the drummer from Def Leppard, who happened to be playing the same night in the big arena.  We actually went to see them and then went to play our show.  I don’t know if it was something weird in the air but it was a very strange crowd and we tried to be loud enough to be heard over the rowdies.  Jace was trying to sing a song and just got fed up and told someone in the audience who was basically yelling the whole time to shut the fuck up.  This person replies “get over yourself” to which another person in the audience gets into some altercation and the night basically ended with bar fights and the cops being called. The end!

I went to university and studied Psychology.  I’d like to be a researcher or a clinical psychologist.  The mind is a fascinating creature to me.

I wouldn’t be able to work at a collection agency or anything that involves taking money from people who don’t have it.

We played once in Omaha many years ago. There was a college football game and nobody came to our show.  It’s totally fine, that sort of thing happens here for hockey so I get it. I also remember going to a laundromat and seeing bullet holes in the window. I started calling Omaha “Omaharsh” after that.

The Besnard Lakes plays with Jaill Monday, May 2, at Reverb Lounge, 6121 Military Ave. Showtime is 9 p.m. Admission is $12. For more information, go to onepercentproductions.com.