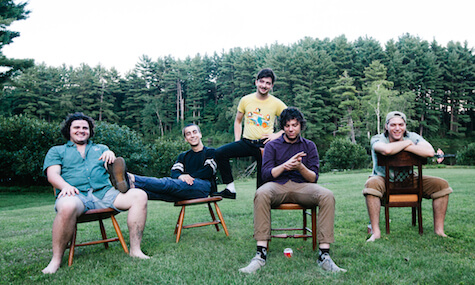 Chicago band Twin Peaks has been consistently described as a “garage band,” but on their latest album, Down in Heaven (2016, Grand Jury) the five-piece smooths out its sound for a collection of relaxed, casual rockers that are more mainstream than garage. It’s smooth vibe is quite a contrast to their breakthrough album, Wild Onion, (2014, Grand Jury), which felt like The Kinks combined with every band on the Titan! label. Maybe it’s a sign of maturity. The band, led by Cadien Lake James, was formed only six years ago, when all the members were still in high school. They’ve since gone from playing house shows to massive festivals like Bonnaroo and now Omaha’s The Waiting Room June 29.

Best part is traveling all over the damn place and playing music every night.

The Canadian border (much love for Canada but that border patrol can be a real pain in the ass).

Tie between cheeseburgers and marijuana.

Chicago is home, so that’s my number one right there.

Can’t think of a worst. We played a ski lodge once in Canada and that was pretty weird, though.

I used to work at a bar called Parsons whenever we were home from tour, but this is my first time riding it out with music and I feel blessed to do so. I’ve worked in the service industry since I was 15 pretty heavy, so I’m grateful.

I’ll probably go back to working in bars once the well runs dry with music, hah. I used to work the window at a McDonald’s when I was 17, I would prefer not to do that again.

I’ve heard y’all got one hell of a zoo there, I’d definitely be down to kick it with some animals.

Twin Peaks plays with NE-HI and Eric in Outerspace Wednesday, June 29, at The Waiting Room, 6212 Maple St. Tickets are $12; showtime is 9 p.m. For more information, go to onepercentproductions.com.