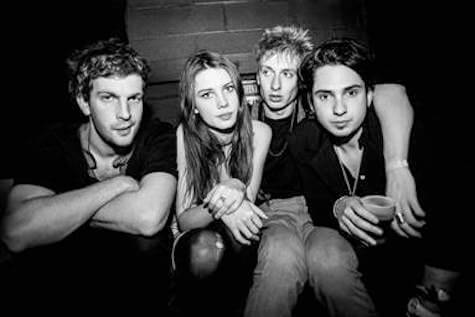 There’s a good reason why UK band Wolf Alice so quickly exploded on the global music scene. Though they officially formed as a duo between frontwoman Ellie Rowsell and guitarist Joff Oddie in 2010, the band in its current form has only been around for a few years, releasing their debut full length, My Love Is Cool (Dirty Hit Records/Sony) last year.

That album not only was critically lauded (nominated for a Mercury Music Prize) but the band also netted a Grammy nomination. Their sleek, blaring rock has been compared to everyone from Hole to Elastica to The xx. They remind me of early Garbage crossed with one of those dreamy 4AD bands, with brazen,  grungy hooks balanced by Rowsell’s beautiful, breathy coo.  It won’t take them long to jump from rock-club sized venues like The Waiting Room (where they play Tuesday night) to arenas and headliner status on the festival circuit. Catch then now when you can still get close enough to touch them.

The band took our Ten Questions challenge. Here’s how guitarist/vocalist Joff Oddie responded (to most of the questions, anyway).

Seeing people be brought together through our music is a really special thing. There are kids we know all over the world who are now friends and go to shows together through listening to Wolf Alice. That’s a special feeling when you see that.

Not being able to cook for myself whilst on long trips on the road. I really miss the kitchen. Sunday’s roasts..

Champagne. If you are coming to a show of ours then please bring champagne.

Wherever there’s a good crowd we’ll have a good show. We love the states. Been making trips here for about 18 months now and we always love it. You guys know how to treat a band!

We had a nightmare show in London once at a small venue called The Lexington. It’s a great venue but all our shit just broke and we were standing on stage for about 20 minutes telling jokes while people tried to fix our shit. That was horrible.

I trained to be a teacher before Wolf Alice so I’d like to do that. Or maybe a butcher.

I don’t think I’d last long in the military.