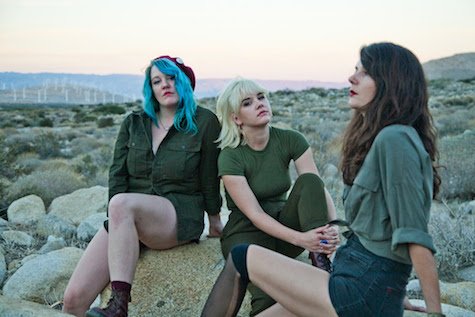 Life can be rough in LA, just ask the members of Bleached. Around the time guitarist/bassist Jessie Clavin was evicted from her house, her sister and bandmate, singer/guitarist Jennifer Clavin ended a torrid, unhealthy romance. The frontwoman struggled and escaped the pressures with drinking and partying, sometimes to excess, feeling like she was losing herself altogether.

The product of that tailspin was Welcome the Worms (2016, Dead Oceans), a 10-song LP created with drummer Micayla Grace (ex-Leopold & His Fiction) and producer Joe Chiccarelli (Morrissey, The Strokes). It’s a snarly, raw pop rock that sounds like Weezer meets Dog Party backed by a California sunrise.

We caught up to Bleached’s Jennifer Clavin and gave her the Ten Questions treatment:

“Tears of a Clown” by Smokey Robinson. The thought of a clown crying is so disturbing and depressing.

Playing a different show to new fans every night. I kinda get like a high off of it.  At first I get nervous and then it all goes away and I feel really excited and empowered playing our songs and seeing people dance and sing along. It’s really cool.

Not getting enough sleep. We just flew over 24 hours to get to Australia and I’m just sleeping when I can.

It used to be alcohol but I’m sober now so my new drug of choice is Chai Tea with steamed soy milk and also La Croix soda water flavor orange.

Los Angeles! It’s our home town and the shows are always so crazy. Also I can’t forget our last show in Gothenburg Sweden because it was next level wild. The whole room was singing along to our song “Wednesday Night Melody.”

That’s hard to answer because even when there is a malfunction like someone’s guitar strap breaks or an amp stops working it’s all part of the show. But my least favorite would be this show we played in a town outside of Detroit and mainly because it was a really awkward room  with fake trees everywhere and I couldn’t hear my vocals at all. Not enough vocals in my monitors always majorly stresses me out.

Playing music. I keep my bills to a minimum but all the touring helps pay them.

Fashion design. I always thought that was going to be my lifetime career. I still plan on it.

As for the profession I would hate, being a security guard in a prison.

I haven’t heard many stories. However, I have one of my own. The first time I ever went there with my old band Mika Miko we found a random lake to go swimming in. The second I jumped in I broke my toe and had a broken toe on the rest of that tour. :/