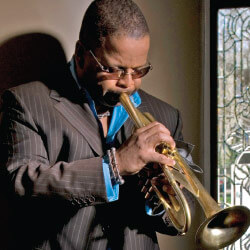 Jazz trumpet star, multi-Grammy winner Terence Blanchard strides into Omaha again, fresh from a new CD “Breathless.” Despite that title, he’s certainly got the chops and the power to blow his horn,  just as he did here in November, 2013 as part of that salute to New Orleans, Treme. Echoes and influences of his home town underlay what he did back then. He’s got a new thing. One which he laid onto the public barely a month ago. It’s The E-Collective, an Electrically- connected quintet in which he aims to explore and combine post-bop, funk, fusion plus R& B, satisfying a long yearning, he explains, to explore such territory. As such, he tends to blend notes and rhythms from Les McCann. Hank Williams and the British rock band Coldplay along with his own latest conceptions, a spin- off from what he and the group laid down studio-wise in what he calls a “protest album.”

Dancing in the aisles may be off-limits but it’s a treat to beat your feet in your neat seat.