Home » Music » The Art and Family of the Open Mic

It feels like an exciting time to be a creative in Omaha. I’ll admit I haven’t been around all that long (I’m old enough to get kicked off my parent’s health insurance next month), so my perspective on the phases of this city’s creative scene may be limited, but I’ve personally witnessed some creative magic bubbling up in recent years as artists of all types find and experiment with their voice and the impact that comes with utilizing it,  frequently at open mic nights.

Long an opportunity for burgeoning musicians, comedians and poets, who may not otherwise have venues, to perform their work for an audience, open mic nightsgive them the cathartic chance to show the world, or a small bar full of artists, what they have been quietly working on night after night. It’s the opportunity to face fears of embarrassment and grow as an artist by expanding the feedback loop. These nights don’t only draw performances from newbies, but more seasoned performers frequent the stage to debut new pieces, work out the kinks in collaborations, or just enjoy a night in community with other artists. Different open mic nights have different atmospheres and draw different artists and crowds, and this is largely dependent on the host.

One of the longest on-going open mics in this city is hosted by musician, momma, and activist Aly Peeler at the location of the Down Under (DU), formerly the Sidedoor Lounge, for nearly seven years now. Peeler started in 2010, she said, when she moved into a house behind the then Sidedoor. Due to proximity and a fondness for the vibe, Peeler said she became a regular at the bar and performed her music publicly for the first time from its stage. The bar already had an open mic night when she started, but after filling in for the hosts a few times while they were on tour, Peeler eventually became the main host and organizer of the weekly event. She has been hosting this open mic night, rain or shine, every Wednesday since, only briefly taking breaks around the births of each of her two children. 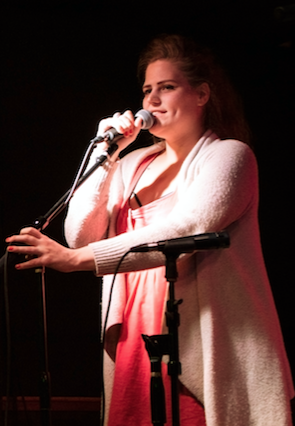 On a Wednesday evening at the DU’s open mic night you could potentially hear a full rock band, a rapper, folk singers with soaring vocal harmonies, or a beginning guitar player sharing tunes, all in one hour. A hippie crowd tends to frequent this bar, and around 11 p.m. , along with music you will likely find the place filled with tie-dyes and smiles.

Peeler said that she wants people to feel the freedom to be themselves at the weekly gathering.

“I feel like every Wednesday is a mini-festival,” she said. “Every 15 minutes I’m blown away by the talent!” She said she didn’t understand why open mic nights have a stigma.

“You don’t like someone, personal preference, give it 15 minutes,” Peeler said. “Go outside, have a smoke, go play darts… and really I think there’s no reason to not listen to everyone because I do believe everyone has something really valid to share.”

According to Peeler, participating in the DU’s open mic night is about more than sharing your creations or attending a free display of local talent every week.

“It’s our church,” she said. “I’ve seen it save people, myself included, just that accountability of getting together. I love being able to facilitate that, and I’ve been inspired by so many people.”

And, to Peeler, accountability is important in the creative community.

“Because we are so creative,” Peeler said, “we create these very imaginative lives for ourselves and problems and things. We get into ruts, and so it’s good to be surrounded by people that hold us accountable.”

Beyond that accountability from other artists to keep practicing your craft, musicians and poets can inspire each other when they are all in the same room together. 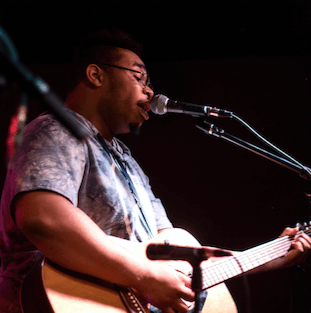 Local artist Jamire Graye, who plays what he describes as “electro-pop-soul,” has been performing at open mic nights in Omaha for about four years. Graye said he performs at the DU on Wednesdays as much as possible, and every time I’ve seen him play there, the crowd excitedly sings and dances along.

“All my music is shaped from everyone’s energy and happiness,” Graye said. “Being around everyone helps pave the way for a song being written. I take some of the energy I get and put it back out through my music”

It’s no accident though that the DU’s open mic feels so warm and accepting, that’s part of Peeler’s intention.

“I like to have the approach like a momma would, even before I had the babies, having that unconditional love,” she said.

Though Peeler makes an effort to provide a welcoming environment, nervousness is common among new performers. She encourages people not to let that keep them from sharing their art and growing in the community.

Graye experienced anxiety when he began sharing his music as well.

“I used to be so nervous my legs would shake visibly,” Graye said. “I had so many insecurities, but being in this music scene has helped me get better every day. That’s why I love Omaha.”

Gathering local musicians together regularly also provides opportunity for collaborations. Peeler told me some of her favorite albums and projects have stemmed from the DU’s open mic, such as Collin Smith and the Cosmic Smiths, Chris Doolittle and Side Talk, and Valerie Electricradbolt and Kristen Taylor. But Peeler feels it’s beneficial for people who are not musicians or poets to be present as well.

“There’s something really special to watch the creative process, and there’s no better place I’ve found than at the Down Under Lounge,” said Peeler. “I love looking out and seeing so many artists and musicians, but where are all the music appreciators? Where are all the people who love to just move with music? Because those people have a very active role in this as well.”

For those who would like to come check it out, the Down Under’s open mic night occurs every Wednesday from 8 p.m.-2 a.m., with minors being allowed to perform from 8-9:15. Peeler encourages people to come as an observer at least once before signing up to perform. She currently fills the night with performers one to two weeks in advance, so when you’re ready to sign up, you can talk to her in person on a Wednesday night. 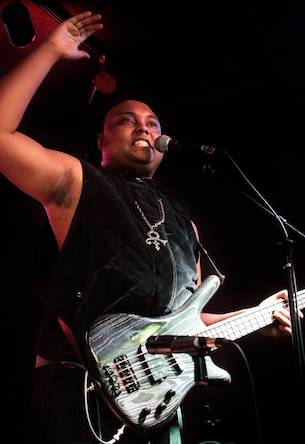