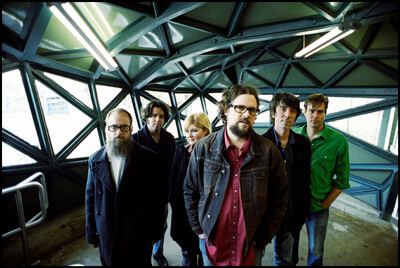 Ten years ago I sat in my basement with a good friend who also happens to be a songwriter, puzzling over a double disc record Southern Rock Opera released by the then unheard-of Drive by Truckers. While the scorching guitars owed a debt to the classic Southern Rock tradition, there was something more to these songs, something tangible and real and gritty. The Truckers have released six solid studio albums in the time since, including this year’s spectacular Go-Go Boots.

The band is currently based out of music-hotbed Athens, Ga., but they come from another place with a solid musical history, Muscle Shoals, Ala., home of a legendary recording studio. Go-Go serves as a testament to the Country-Soul music Muscle Shoals was known for 30 plus years ago. With Patterson Hood, Mike Cooley and Shonna Tucker all contributing original compositions, the record manages to serve full-fledged Country-ache, hell-bent for leather Rock and the uplifting Soul of a Hammond Organ backing it all up. While DBT has always done things in its own way, Hood looks back fondly on the band’s slow rise and the merits of doing it their own way.

“I knew no matter what I’d still be playing music man,” Hood says. “I’d given up on the whole rockstar thing ever happening, but we were crazy enough to keep going. That’s kind of what The Truckers is. Cooley and I had been in bands 10 years prior to The Truckers. At that point we should have quit, settled down and got real jobs. I figured we’d be able to cover a living but I never thought we’d be where we are today. I mean we’ve never had a hit record or anything but we’ve also never had to try to change to be part of some sort of trend.”

Engaging songwriting and a strong musical sense of place have carried DBT well, but it’s the band’s balls-to-the-walls live show that has set them apart from the pack. A Trucker’s show isn’t just a concert; it’s an experience. The band plays with a willful abandon, unafraid to try new things and keep the sound fresh. The band has maintained a full touring schedule for the past couple of years and has forged a legion of loyal fans in the process. Rolling Stone magazine recently named DBT “Best Road Warriors” of 2011, an honor that is both well-deserved and well-earned.

“That’s good,” Hood says of the magazine mention. “They also liked our Greatest Hits record, it was a nice compliment. I agree, I think we’re a good live band. For one thing, we have fun up there, that’s the key. We don’t use a set-list and so we can’t even predict what’s going to happen. There’s always that chance that it’s going to all go off the rails and crash. And I think that’s healthy. We’re having a good time. We don’t know what’s coming next. We’ve got a lot of hand signals and cues we use up there. We’re like a baseball team.”

After releasing two solid records in the past two years and maintaining a touring pace that would have left The Grateful Dead winded, DBT has decided to slow things down a bit next year. Hood plans on using the temporary lull to work on a solo record.

“I’m going to be making a solo record,” Hood says. “It was kind of unexpected; I had no intention of doing it. It came from a bunch of writing I did over a short period of time and us not touring too much over the next year. It’s just been this endless cycle of touring for awhile. I mean, we’ll be doing some shows here and there but we’re not doing any big tours. So I got some interest from the label in a solo record and got a wild hair. The songs, they’re not really a Truckers record; they’re their own thing man. It’ll be more of a stripped down arrangement.”

Drive by Truckers play The Slowdown, 729 N 14 St. on Wednesday, October 26 at 9 p.m.. Those Darlins open and tickets are $25. For more info or to purchase tickets visit theslowdown.com.