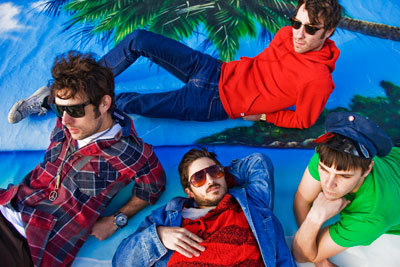 This past Monday marked my third year in a row attending what seems to have become the annual spring Black Lips show. The self described “flower-punk” band from Atlanta, Ga. did not disappoint. Opening the night was Omaha’s own Dave Goldberg, formerly of the Box Elders, who started things off with a synth trip that sounded like ecstasy strung out on lo-fi. His sound almost scares you away but, he manages to lasso you right back in when the dance beats kick in overlapped with his fuzzed out vocals. There was one other band I could tell you about, The Vivian Girls, but, I had to get some liquid courage over at Jake’s Cigar Shop before venturing out into the raucous crowds the Lips are known to pull. Luckily though my partner in crime was able to get some video of a handful of their songs, which you can view at MusicOmhaShow.com along with Goldberg and the Black Lips. There is a lot I could say about the Lips’ show at The Waiting Room — such as how they didn’t seem quite as crazy as I remember them in years past — though crowd shenanigans more then made up for that; or how guitarist Cole Alexander’s mustache keeps getting more and more epic; but perhaps the best way to sum up their show is to steal a favorite word from one of my Reader counterparts, “fierce.” Check out the video above and find out for yourself, as the Black Lips perform “Bad Kids” at Omaha’s very own Waiting Room. Also checkout this week’s Backbeat to read Chris Aponick’s thoughts on the show.