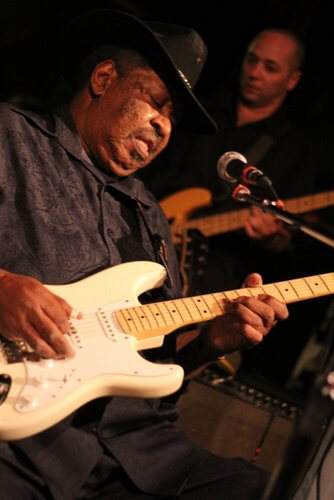 Lincoln resident, Zoo Bar family member and blues legend Magic Slim was laid to rest in a funeral service Saturday, March 2, at Horizons Community Church in Lincoln. At least four generations of local musicians were influenced by Slim’s adoption of the Zoo Bar as his home away from home since 1975 and his move to Lincoln in 1994.

Chicago’s venue The Mayne Stage will be the site for a tribute to Magic Slim Thursday, March 28. Performers at press time were expected to include Billy Branch, Eddy Clearwater, John Primer and Shawn “Lil’ Slim” Holt performing with The Teardrops.

Josh Hoyer is a Reader contributing writer who authored last week’s cover story on Magic Slim and is one of the Zoo Bar musicians who called Magic a mentor and a friend. Hoyer’s own latest band has their Omaha debut at The Waiting Room this Friday. Josh Hoyer & The Shadowboxers open for Satchel Grande Friday, March 8. The Shadowboxers are a seven-piece R&B/soul/funk band featuring some of Lincoln’s finest musicians laying down a mix of Hoyer’s original tunes and R&B, funk and New Orleans’ classics. Their Lincoln debut in December melded top-flight musicianship with a wicked sense of soulful grooves.

Bacon at the Zoo