Home » Music » The Cost of Everything 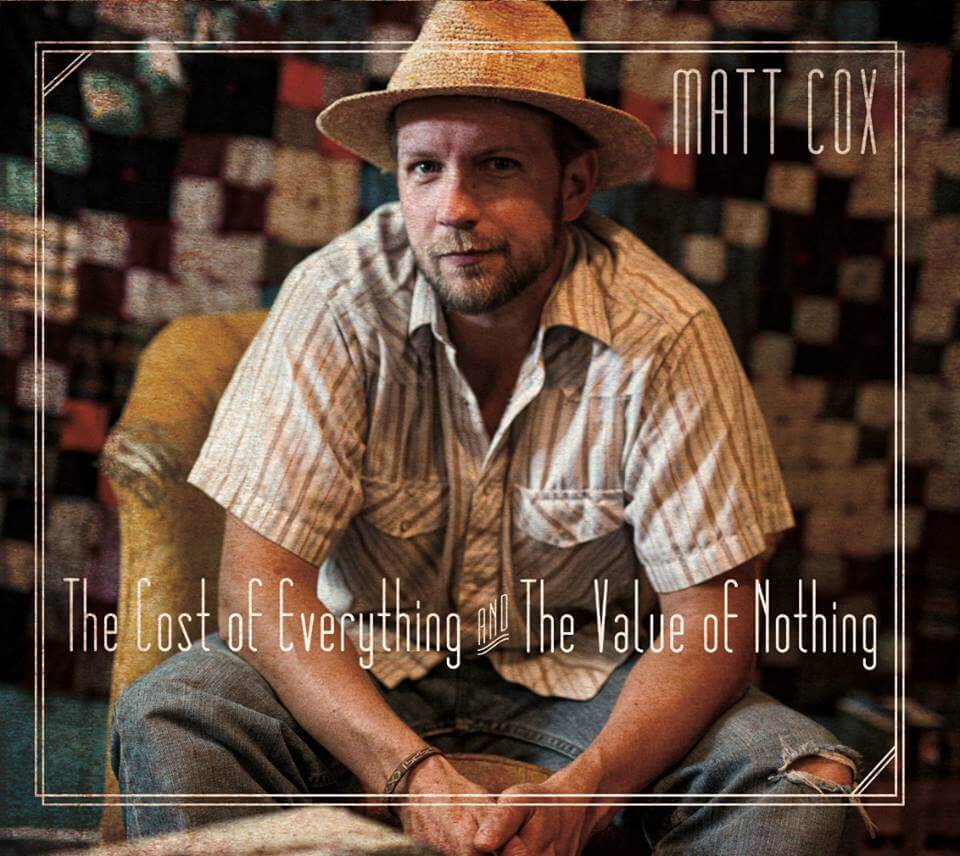 Matt Cox’s newest album begins with the death of his mother and ends with the collapse of all humankind, and somewhere in between is a critique on the excesses of 21st-century America. For all that, The Cost of Everything and the Value of Nothing, a repurposing of an Oscar Wilde quote, give or take a word, is oddly optimistic and slightly utopian.

“I don’t spend a whole lot of time thinking about the cost and price of things anymore as much as I do the belief that there’re things more valuable than money in life,” Cox, 35, said from his Dundee basement hermitage while nursing a beer and listening to an old Elmore James record.

It’s a sharp emotional turn since last we met the singer-songwriter along the banks of his 2014 release Nishnabotna, his first with Sower Records. At that time, Cox’s amalgamation of roots, folk, country and blues longed for the past and scoffed at any possibility of a silver-lined future. Now things are different. Now he’s a husband. Now he’s a father. Now he can appreciate “the simpler things in life.”

To the untrained ear, The Cost of Everything… will probably sound like a pickup-truck commercial. After all, automobile companies have been appropriating the Americana tradition for decades to peddle beefy Hemis to wannabe cowboys. The only difference is Cox is marketing his product at the bargain-bin price of a CD, o.b.o.

The more sophisticated listener, that is, those whose gas-guzzlers lack ball sacks and decals of little cartoon boys peeing, might hear something entirely different. To them, the album will probably echo how NPR sounds when they tune into All Things Considered and forget it’s a Sunday afternoon.

Either way, the six-time OEAA award winner’s newest album, slated to drop July 15 on Sower Records, will sound all-too familiar, like it’s been written before, like it’ll be written again. And, to be fair, that’s probably the point. But underneath that top-heavy layer of genre and expert musicianship remains a unique coming-of-age story that will captivate anyone with a pulse. You just have to know where to look.

Cox didn’t set out to write the lyrics to a song when he authored the first track of his fifth studio album. He was just spilling his guts in the form of a letter to his dear, departed mother who had died of cancer a few years earlier.

“There wasn’t necessarily a charcoal grill that I had in mind,” Cox said. “But just thinking about her when I got to writing those words and writing about if we could have one last meal, I decided it wouldn’t have to be some big fancy thing, I think it’d be roasting some burnt weenies at a park somewhere or by a campfire.”

Throughout the track, against a folksy backdrop, Cox’s speak-sing vocals move his letter forward, line by line, eventually delivering the record’s most effective chorus and the moral of the song: Don’t take the present for granted.

If The Cost of Everything… professes an anti-cynical disposition, then “Half-Empty” betrays the album’s theme in name alone. Of course when Cox decided to revisit it in an old notebook, the song itself was already 10 years old.

For the better part of the bluesy, up-tempo tune, Cox as a young man airs his financial woes: “You pay ’em one bill and they send you 10 more.”

“I find it funny that I wrote it when I was in my mid-20s,” he said with a half-smirk. “The words in it are so much more true now than they were then.”

When the Iowa native wrote “Nighttime Drifter,” Cox said he was channeling “The Stones in a drab basement recording Exile on Main St.”

And if the singer-songwriter hadn’t given his muse away himself, perhaps the song’s Jagger-esque harmonica solo would have. Otherwise, the third track serves as a brief respite from the album’s emotionally heavier material in the form of a drinking song.

“I wrote it when I was probably half-cocked,” he said. “They’re not the most brilliant lyrics in the world, but it’s a fun party tune — I think anybody knocking back a couple could appreciate it.”

After a near-fatal car accident in his late teens that tore his automobile all but to shreds, Cox said his grandpa visited him in the hospital and declared that he still had a purpose in this lifetime to have had survived such a wreck.

Cox spent the next 13 or so years wondering what that purpose was. And then he met his wife and his stepdaughter, Lauren, who is the namesake of track four.

“Until I finally met her, her mom, and this life, I don’t know that I ever fully believed that he was right, that there was a real purpose,” he said. “I finally feel like I found that purpose, what he was talking about.”

Inspired by yet another pet name for his stepdaughter, the record’s only instrumental track puts the energy of the album on full display. To achieve this raw but polished sound, Cox recorded the entirety of The Cost of Everything… in studio with a live band including Colin Duckworth (pedal steel, guitars, mandolin), Vern Fergesen (accordion, piano), and Josh Dunwoody (upright bass).

“We definitely found a vibe and an energy in the recording that I don’t think I’ve had in any other recording I’ve done before,” he said.

Trouble All Over the World

The album’s de facto single was another salvaged song from another long-lost notebook that Cox remembered he had after the November 2015 Paris attacks:

“I see trouble all over this world/Every town, every country/Every boy, every girl,”

Originally written by Cy Coben, the bluegrassy waltz was performed at Cox’s wedding last year by a dear friend. Cox decided to do his own version on The Cost of Everything… as a tribute to his wife.

The piecemeal medley that is track eight sings like a lonely service station off of I-80 east. Take the following line for example: “When I get down to that river/I’m gonna see if all my trouble can swim.”

“I think I got that line from a hat that I saw at a truck stop somewhere,” he said. “Tried to drown my problems but she learned how to swim’ — something real redneck like that.”

“Happy Home” was inspired by a conversation Cox had with his father right before he left home to pursue a music career:

“Things are not always going to be perfectly laid out for you and smooth,” Cox said, remembering his father’s advice. “You’re going to have to make hard decisions and sometimes you gotta gamble.”

Cox was cleaning windows outside of The Great Escape movie theatre one day last year when a thought occurred to him: We’re screwed. Human beings, that is.

For all the doom and gloom that the album’s coda espouses, when juxtaposed with the rest of the songs, Cox’s last track seems to reveal the songwriter’s final moral act:

“My idea of success is not having an overabundance: Not too much space, not too many things,” he said. “It’s being comfortable with where I’m at.”