Home » Music » The Divinity of Purpose Tour in Omaha 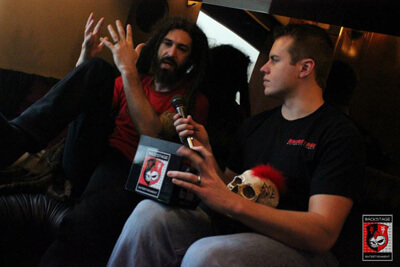 The Divinity of Purpose Tour featuring Hatebreed, Shadows Fall, Dying Fetus, and The Contortionist came to Sokol Auditorium on their third date of the tour. Monday night January 28th was a great night for heavy metal. It was the night before Hatebreed’s newest album, “The Divinity of Purpose,” was to be released in the U.S. All of the other bands have had their recent work released last year and were touring in support of that.

89.7 The River helped make this show possible and brought the tour to Sokol, which many metal fans appreciated. With shows like Maroon 5, Taylor Swift, and Justin Bieber coming to Omaha later this year, it’s great to see the metal and hard rock shows as well. Many fans packed Sokol for the show that night and, other than the fog, the weather turned out to be pretty nice for the show. All of the bands, including the local guys in The Matador who opened the show, brought a great performance and had the crowd in it the whole time.

Backstage Entertainment caught up with all of the bands that night and talked about each band’s recent work and what they expect from this tour since just starting it a few nights before.