Home » Music » The Good Life: Living in the Moment 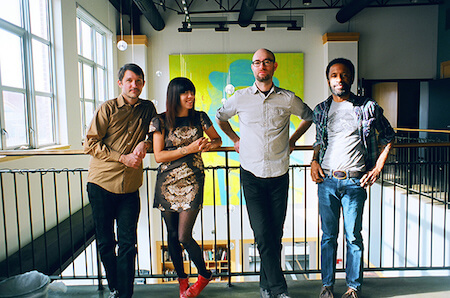 The Good Life frontman and chief songwriter Tim Kasher said he wasn’t “intending any high concepts” for the band’s new album, Everybody’s Coming Down, out Aug. 14 on Saddle Creek Records.

He then proceeded to explain the album’s high concept.

“(The songs) are based around these ideas I was juggling about the constant tension of anticipating something,” Kasher said via cell phone while walking to an appointment somewhere in Chicago.

“It’s impossible to live in the moment because you’re always living after that moment. We spend our lives either looking back or looking forward, depending on where you are in your life. It’s difficult to experience things in the present. I started thinking about how much we anticipate things and how the moment after that thing happens, we feel a let down. We’re always living in the wake of something that was great, and then it’s gone.”

“There’s not a narrative that runs through the songs,” added Fox, “but there are loose ideas that link them.”

Good Life drummer Roger Lewis, the only band member who still lives in Omaha, had a different take altogether when I ran into him at a recent show at Reverb Lounge. He said Everybody’s Coming Down is simply the best album The Good Life has ever made.

Big words considering The Good Life has released some amazing records since the band formed as a side project to Kasher’s other band, Cursive, in 2000. Starting with their debut, 2000’s Novena on a Nocturn (Better Looking Records), The Good Life has been the simpler, more song-focused “other” to Cursive’s more acidic, angular post-punk rock. Follow-up albums, such as 2002’s Black Out and 2004’s Album of the Year, were laid-back and more hummable than anything Cursive ever released; while 2007’s Help Wanted Nights (the band’s previous record) was an acoustic-guitar driven collection of pop songs lyrically centered around a movie script of the same name, also written by Kasher—talk about your concept albums.

By contrast, there’s nary an acoustic instrument to be heard on Everybody’s Coming Down.

After a pretty 33-second intro, the 12-song LP roars open with a distorted electric guitar solo that sounds like an outtake from Neil Young’s Rust Never Sleeps. It’s an apt starter for a record that showcases blazing, guitar-flaring numbers like the aforementioned “Everybody,” buzz-saw raver “Holy Shit” and psych-trip numbers “Flotsam Locked into a Groove” and “Ad Nausea,” which features one of the most out-there guitar solos by Fox that the band has ever recorded. So hard-edged are these songs fans might mistake them for Cursive tracks if not for the ‘70s-rock guitar riffs.

It ain’t all noise either. The album also includes the same rhythmic indie pop The Good Life fans have come to know and love, like the self-referential “The Troubadour’s Green Room” (Kasher again examining his life as a songwriter/musician) and the floating-under-water “Diving Bell” that sports siren-like vocals by Drootin-Senseney.

The album’s diverse sound may be a reflection of the distance that separates band members. Despite a long hiatus, the group came together rather quickly after Drootin-Senseney received an e-mail out of blue from Kasher while she was in Dallas recording with her other band, Big Harp.

“I’d been thinking about getting back together but kept it to myself for a couple years, always looking for a window between projects,” Kasher said. “And then it occurred to me that there will always be something going on, and I’d have to create that window myself.”

Drootin-Senseney discussed the project with husband, Chris Senseney, who, in addition to playing in Big Harp, shares the chores of raising their two young children. “We all knew it was going to happen eventually,” Drootin-Senseney said. “I was super excited and not that surprised. We all have other things going on, but we miss it when we’re away from it.”

“It’s like the cicadas, you miss them when they’re gone,” said Fox, who, among other things, spends his off time running a tape-only record label that will release the next Big Harp recording this month. “Playing in The Good Life is like old friends getting back together.”

The band reconvened from July to December 2014 to finish writing and started recording in January 2015 with Ben Brodin at Omaha’s ARC Studios. Producer John Congleton, who’s worked with such artists as St. Vincent and Angel Olsen, was brought in for final mixing. The result is an eclectic album that sounds like nothing you’ll likely hear on Sirius XMU.

Fox and Drootin-Senseney said they weren’t sure where the record fits in with today’s music. “I hope it belongs somewhere, that it has an audience,” said Fox, who added he couldn’t even think of a band that would make sense to tour with The Good Life: “No one comes to mind. It’s not like we reinvented the wheel.”

“It comes back to the word ‘visceral,’” Drootin-Senseney said. “With the record industry wacky right now, people are letting loose and doing their own thing. We just wrote the record we wanted to write and felt right to us.

“It doesn’t sound like anything else,” Drootin-Senseney added. “For a while, the music scene seemed emotionless. People were angry at rock ‘n’ roll; they were against it. Now I think they’re okay with it again.”

Kasher also isn’t sure where The Good Life fits in with today’s music. “We kind of have to wait and see,” he said. “The answer may never reveal itself. I will say I have been interested in doing a really alternative rock band, the kind of band I set out to do back in the ’80s, and we’ve returned to that MO more with this record than any other.”

He pointed to a number of Omaha bands influenced by ’90s rock, such as Noah’s Ark Was a Spaceship and See Through Dresses. The difference between The Good Life playing “120-Minutes-style” alternative rock versus those bands, Kasher said, is “we’re actually from that era.”

“Who does it better?” he asked. “Listening to a band like us play that style of music may be like listening to a bunch of dinosaurs. Maybe the younger generation can make it sound better. What remains to be seen is if people want to hear us do it.”