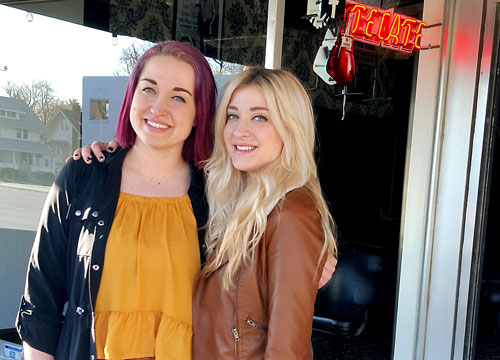 “I mean, we’ve been playing together forever, as sisters,” said Heather.

In fact, they said their whole family is quite musical. During a recent discussion at Pageturners, where they started out playing open mic nights, they said their grandfather grew up playing and singing in pubs around England before moving to the U.S. as a teenager.

Growing up, they said they would often sing three- and four-part harmonies with their younger sister, Tiffany, and their mother, Bridget, who also plays the drums.

Their latest venture started shortly after Heather moved back to Omaha from Nashville. They added drummer John Evans, 20, to complete the sound.

Both girls cover vocals, with Jessica also playing acoustic and electric guitar and Heather on the synthesizer, tambourine, or “different little ‘flair’ instruments.”

Jessica said the “crux” of what they do is super-tight vocal harmonies, which lends the folky, old-school sound of their music. “But then with the instruments that we add, it brings in a much more diverse sound.”

Their influences and tastes reflect this diversity. Jessica said she has been listening to a lot of The Mamas and The Papas lately, and also, “anything from The National.”

Heather said when she was younger, she loved LeAnn Rimes and Justin Timberlake. Currently, she likes St. Vincent and Vampire Weekend.

“They’re really happy and colorful all the time,” she said of the latter. “If you’re feeling down, put in Vampire Weekend and you’ll suddenly be happy.”

While the women said they would categorize themselves as indie-rock or indie-pop, they said a lot of the comments they get after shows are along the lines of, “I don’t really know what genre you guys are.”

Jessica said that’s probably because their sound is very different when they’re playing acoustic versus electric.

“When we play acoustic, we sound folky, with an almost old-school gospel sound to it, and when we play electric, it’s very pop-rock,” she said. “Even, some of our songs sound country, and we have rapped at our shows before.”

With that kind of diversity, it’s easy to see why their music is hard to define. And why they seem to be popping up all over lately.

The two said they’ve had some great responses to their shows, particularly a recent one at The Down Under Lounge.

Heather said she really enjoyed all the dancing she saw there that night, with people just connecting with the music and the two art forms coming together.

Jessica said she had a very personal response from one fan in particular.

“I had a girl come up to me, and she was crying, and she grabbed my arm and said, ‘Hey, I heard the lyrics you were singing about, and it really moved me … and I just want to encourage you to keep doing what you’re doing.”

She said seeing someone connect with the experiences and emotion that they’re pouring into a show makes it all worth it.

“That was a good night,” Jessica said with a laugh.

“It was a really good night,” Heather said, smiling.

*You can have a really good night too, if you check out The Hottman Sisters this Tuesday at The Reverb Lounge, where they will play with Denver-based four-piece Flaural. Show starts at 9.