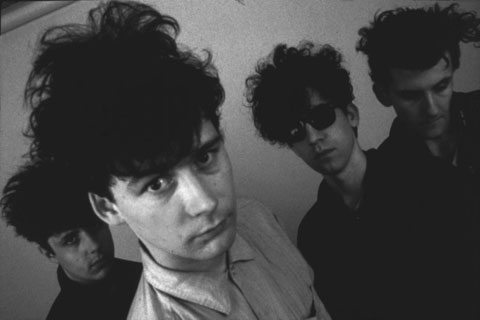 I can still remember exactly where I first heard The Jesus and Mary Chain. Flipping through records at Drastic Plastic, I was struck by the gentle fuzz-covered beauty of “Just Like Honey” dripping out of speakers. I was mesmerized by the combination of early ’60s pop melodies and buzz saw noise, and I immediately purchased a copy of the Irish group’s debut album Psychocandy. It was the first time that I heard a record that was simultaneously abrasive and gentle. It also cemented the group’s creative duo, Jim and William Reid, as pop geniuses in my mind. With Psychocandy, the Reids created a record I could blast out of my three-disc changer to piss off my parents, or quietly contemplate its hidden messages while listening on my oversized pair of Sony headphones. In other words, it was everything a good rock n’ roll record should be.

The follow-up to that record, 1987’s Darklands, found the band trying to clean up their act, if only slightly. The Neolithic drumming of Bobby Gillespie was gone as he departed to form Primal Scream, the layers of offensive feedback had been stripped back, and the anal sex references were expunged. The first time heard it I hated every second of it. It felt too safe and too formulaic. To me, it symbolized one of the most dangerous bands in rock giving into their corporate overlords. It goes to show that nothing has the power to piss off a 17-year-old faster than their favorite band “selling out,” even if it happened almost 25 years ago. It would piss 17-year-old me off even more to find out that I now prefer Darklands to Psychocandy.

As is the case with many of my favorite records, coming to love Darklands took time. During my piss and vinegar phase, a straightforward pop record was just about the last thing that I wanted to hear. With time come changes in taste and an appreciation for art in all its forms.

At the risk of sounding prematurely old, I have reached the point where I do not want to listen to ear-splitting records all the time. For as much fun as the Psychocandy is, there are times when its combination of noise and Jim Reid’s deadpan come dangerously close to style-over-substance territory.

Darklands, on the other hand, feels like a stroke of pure pop craftsmanship all the way through. The Mary Chain were always capable of writing a great pop song and on Darklands that prowess is on full display. Nowhere is this more apparent than on the singles trifecta of “April Skies,” “Darklands,” and “Happy When It Rains.” Each tune features a chugging rhythm, William’s trebly guitar meandering, and, this being The Mary Chain, a slightly demented twist on your typical love song lyrics. All very similar to one another, but all deeply satisfying nonetheless.

There are plenty of nods to Psychocandy as well. “Down On Me” still stands as the band’s most polished version of the satanic surf rock of their first album. Deep cut “Fall,” cranks up the noise and drops the dementedly fun lyric “everybody’s falling down on me/and I’m as dead as a Christmas tree.” The group cited The Velvet Underground as a massive influence, and the simple Moe Tucker-style drumming and despondent lyrics of “Deep One Perfect Morning” could slip onto almost any Velvets record.

All of it was brought together with a new level of studio sheen. While often credited as one of the forefathers of shoegaze for their use of noise, the Reids rarely get the credit they deserve for being talented producers. Famously contentious during recording sessions, the Reids took an inordinate amount of time putting the album together. It shows up in the smallest details like the simple, methodic drum pattern “On The Wall,” still as hypnotic as anything the band ever recorded. That attention to detail is something you would expect from a pair of brothers who decided to buy a four-track instead of a car when they were teenagers.

It may never be considered the stone cold classic that Psychocandy is, but who really cares? While those idol worshipers are yammering about how groundbreaking that record is, I’ll be at home listening to Darklands. To hell with my 17-year-old self.