Home » Music » The Rapper Next Door 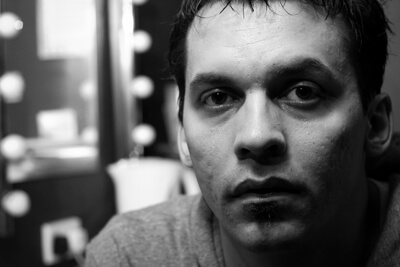 “F*ck both sides. F*ck the underground. F*ck the overground. F*ck the middle ground. It’s just a bunch of f*cking people trying to find their identities. Once you get comfortable with who you are as a person, you’ll stop complaining about all of that other dumb ass shit,” says Sean Daley, better known these days as Slug of Atmosphere.

The Minneapolis-based emcee, songwriter and co-founder of Rhymesayers Entertainment is at a place in his career where he can relax, at least a little. After two decades in the business, a slew of successful albums, an arsenal of adoring fans and sold-out tours, he’s made a permanent imprint on the hip-hop community. Daley has made it. He has no complaints.

If his statement seems arrogant, it’s not. He makes a good point. People always have something to prove. It takes a certain level of success to feel comfortable. After all, Rhymesayers is almost synonymous with hip-hop today, especially in the Midwest, and that’s no easy task. It’s always West Coast this or East Coast that, but thanks to the talents of artists such as Brother Ali, Eyedea and Abilities, P.O.S. and, of course, Atmosphere, Rhymesayers has built an impenetrable Midwest empire.

“I was always confident in the people. I knew Brother Ali would be great. I knew Eyedea would be great. I didn’t’ know how that was going to happen, but I was confident in the artists,” he says. “I think most of us in the Midwest are kind of like sponges. We absorbed everybody and so we’re kind of a mish mash of all of it. You can hear a little bit of Nas and KRS One in us. You can hear a little bit of Ice Cube and Digital Underground in us. It’s like we sound like all of our influences.”

Unless you’ve listened to Atmosphere records, Daley can appear a bit on the reserved side. His lyrics, however, reveal every emotion in the spectrum, delivered with  a brutal honesty and raw aesthetics. Over the years, he’s evolved into a master storyteller. His lyrics are all “fictional,” he says, but there are hints of autobiographical material throughout his catalog.

“It’s coming from your hand, your mouth, your eyes, but it’s not like any of those stories were truly autobiographical. They’re used to exemplify the struggle or dichotomy between the genders. Honestly, half the time I was using that gender struggle as a metaphor for how I saw other things,” he admits. “Anybody that thinks I had a girlfriend who was as hard to deal with as Lucy is ridiculous. I had 15 girlfriends that were as hard to deal with as this character, Lucy [laughs]. I stopped doing fictionalizing in the first person awhile ago. There are two songs I did that are incredibly autobiographical while on past albums like God Loves Ugly, all the songs were metaphors. I adhered to go first person with those two particular songs, but everything else I went narrative all the way.”

Paired with beats by his partner in rhyme, Anthony “Ant” Davis, Atmosphere is one of the more relevant acts in underground hip-hop to come around in a long time. However, there almost wasn’t a Slug the emcee. His first love was DJ-ing.

“I just wasn’t progressing as a DJ. I started DJ-ing in ‘87. I learned how to transform and I didn’t really progress beyond that,” he says. “When people started doing flairs and shit I was just like ‘I don’t care about that fancy shit.’ I just wanted to blend and stuff. So I figured I would just chill and rap.”

With influences ranging from KRS One to Public Enemy, all he really wanted to do was give back to his heroes.

“I guess for the most part it’s like a ritual you do to give back to the people who gave it to you. Aside from the fact that we built a business out of it, we’ve turned it into a vehicle for other people to share their stuff,” he says. “It all come down to this- it’s guided by the governor in me that wants to make sure I give back like KRS and Rakim did to me.”

While Daley may seem like this untouchable superstar in the music world, he’s just a regular dude who enjoys online chess.

“I stay pretty detached from how many shows I sell out or how many units I move. I focus on the fans and try to be as personable as possible because I understand that’s what they’re here for. At the end of the day when I go back to my house, I don’t think about this shit.” (Kyle Eustice)