Home » Music » The Return of The Rentals, Again 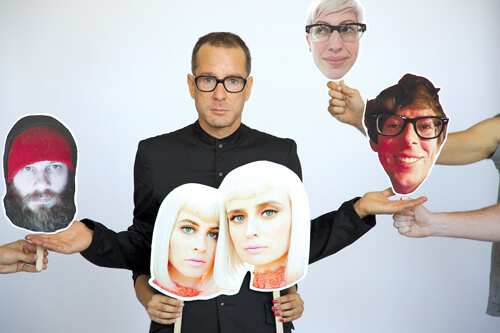 Matt Sharp likes to mix things up. The frontman and chief songwriter behind synth rock act The Rentals has been inventing and reinventing their sound since he formed the band as a side project to his then main gig in Weezer way back in 1995.

The Rentals enjoyed a hit right out of the gate with a slice of MTV-fueled candy called “Friends of P” off their debut album, Return of the Rentals (Maverick/Reprise, 1995). But the demands of juggling two hit factories at once — Weezer and The Rentals — eventually forced Sharp to commit to only one project shortly after Weezer’s Pinkerton album was released in the fall of 1996.

Sharp left Weezer to concentrate on The Rentals’ sophomore album Seven More Minutes, released on  Maverick/Reprise in 1999. The record failed to produce a hit as big as “Friends of P,” and Sharp put The Rentals on ice for a few years to focus on solo work before revising The Rentals in 2005 with a different line-up.

More recordings — and an elaborate audio-visual art project — followed, and then The Rentals kind of disappeared again, only to return late last year with Sharp fronting yet another lineup for the release of Lost in Alphaville (Polyvinyl, 2014), an album that continued to capture that classic Rentals sound characterized by vintage synths, a pillow of female-voiced “oh’s” and “ah’s,” and Sharp’s own flat, deadpan vocals.

Despite the sonic consistency, Sharp said changing up musicians in the band has kept the project fresh.

“It’s not a traditional group and it never has been,” Sharp said via phone from his East Los Angeles home where he’s rehearsing for the tour that will bring the band to The Waiting Room May 15. “It’s never been that thing of, ‘Oh, it’s just the four of us and we’re in a rehearsal space and here we go.’ You don’t necessarily know what direction you could go in, or who you may necessarily be working with next.”

Sharp said a big part of The Rentals’ sound revolves around the different women involved in the band over the years. “In the very beginning it was just an excuse to work with the Haden Sisters (Petra and Rachel), who were in this band called That Dog,” Sharp said. “They started singing when they were just little kids, and their group was so unique. Seeing them sing together was so effortless and beautiful, it was something I really was a huge fan of.”

For Lost in Alphaville, the female vocals were handled by Jess Wolfe and Holly Laessig of the band Lucius. “A lot of what drove this latest record was working with Jess and Holly in a very similar way,” Sharp said.

For this latest tour he changed out the female vocalists yet again. Holding down the backing vocals will be Lizzi Ellison and Patti King of the band Radiation City (who also will be opening the May 15 show). “It’s different not only musically, but understanding how we interact with each other; what our dynamics are,” Sharp said of rehearsals with the new line-up. “Just seeing how the chemistry changes when one person comes in and another person goes out, I love that part of it.”

The downside, of course, is having to relearn the music. “That makes you crazy,” Sharp said, “like, I can’t believe we’re relearning the vocals for ‘Friends of P.’

Rounding out this version of The Rentals is Shawn Glassford of Starfucker on bass and synths, Ryen Slegr of Ozma and Ted Gowans of Tegan and Sara on guitars, and Jared Shavelson on drums. King and Ellison also will play synths, with King handling violin.

“The good thing about The Rentals is that if we can figure out how to make it work, there’s a home for all those different ideas,” Sharp said. “It also gives you a sense that you don’t really know where you’re going in the future, and that’s exciting — that there’s different possibilities that lie ahead of you.”

The songs on Lost in Alphaville have the same hooky appeal as anything off their hit debut, but that doesn’t mean the record will produce a hit as big as “Friends of P,” which peaked at No. 7 on the Billboard Modern Rock Chart. Certainly Sharp is swinging for the fences as he did back in ’95, bringing in veteran producer Dave Sardy (Rolling Stones, Jay Z, Tegan and Sara) to handle mixing chores.

“It was very important to me to put (the record) in somebody’s hands (who can) give it that possibility of getting heard,” Sharp said. “The hope is that we’re able to get the songs to as many people as possible; people who have no idea about me or my background or what I might have done with Weezer.”

That said, Sharp knows that times have changed, and getting heard has never been more difficult. “If you go back to the ’50s and Elvis, there were only a few channels for the entire country,” he said. “Everybody had such limited options; they experienced things together, like this universal experience of seeing The Beatles on Ed Sullivan.”

Today, with countless channels and outlets for media, is it possible for The Rentals to enjoy the kind of success that Weezer had?

“I severely doubt that,” Sharp said. “I don’t even think that’s in the realm of thinking because that was a different time. For those kinds of moments to happen everything has to fall into the right place.”

When Weezer exploded nationally back in ’95, MTV was a hot commodity, and so was the director of the band’s videos, Spike Jonze. “He was at the peak of what he was doing, and we were fortunate enough to be friends with him,” Sharp said. “You can’t recreate those moments, in my opinion. You just go with whatever the universe is at the time.”

The Rentals play with Rey Pila and Radiation City, May 15, at The Waiting Room, 6212 Maple St. Showtime is 9 p.m. Admission is $15 Adv., $18 DOS. For more information, visit onepercentproductions.com.