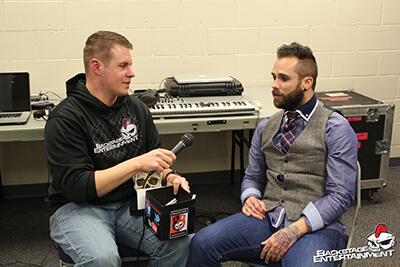 The Omaha Civic Auditorium hosted The Roadshow on Sunday, January 26th. Bringing acts like We As Human, Andy Mineo, Jamie Grace, Third Day, Skillet, and more to the auditorium, the night was filled with uplifting messages, restoring faith, and other positive messages targeted to all in attendance.

During the night, Backstage Entertainment got a chance to interview Andy Mineo and Skillet to talk about the tour, answer fan submitted questions in the “BSE Box,” and more. First, we talked to Andy Mineo as he rolled up to the interview on his skateboard. Andy had an awesome performance that night and even used his skateboard with a camera attached to show fans a different view from on stage. In the interview Andy talked about his new EP, the meaning of his recent studio album, “Heroes For Sale,” and got a chance to answer some questions with a couple volunteers that were working his merch table that night.

Next, we interviewed John Cooper from Skillet. This was John’s third interview with Backstage Entertainment so he wasn’t a stranger to the interview style we do. First, John answered questions about the new album, “Rise,” and explained the ending to the song “Rise.” Fans of the Backstage Entertainment Facebook page submitted some questions along with questions from the “BSE Box” which John got a chance to answer too.

One thing that we like to do for fans is show what a band does before and after being on stage. Skillet give us that opportunity that night to show what it was like coming from their dressing room to the stage and back again after their set. Make sure to check out the links below to watch the interviews, backstage footage, and see the photos from the night.