Home » Music » The Trap Diaries — A Busy Night Out 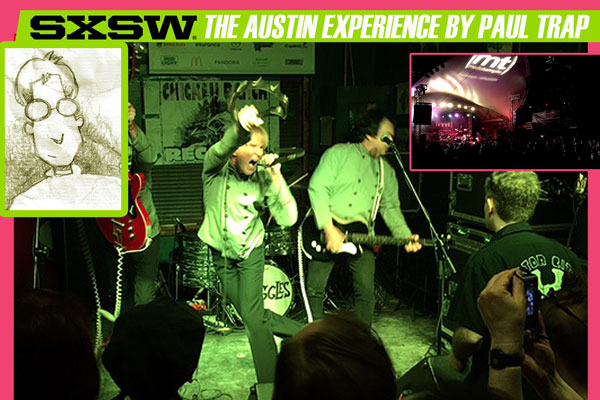 If anyone can figure out SXSW, they have my vote for Master of the Universe. Badge pickup includes a tome of the week’s festivities, with a schedule of where official artists are playing — now most of those artists are also playing free, sponsored events not recognized by SXSW, and then there are the bands in town playing free shows with no SXSW affiliation.

Add in house shows, pop-up events — there’s even a rodeo in town with touring acts — the best one can do is to hang loose, which is pretty good advice in general.

The A-for-effort DoStuff app does there best to keep up on all of it, and list over 4,600 artists performing during the week. That can’t possibly be correct, can it? I have yet to scroll to the bottom and find the end of this list.

There’s also the music conference in the convention center, with most panels seemingly about rising out of the internet noise to be discovered. There should be a panel on doing just that at SXSW.

I’ll admit a fondness for bands that curate their entire package — DEVO, the Hives, a begrudging nod to KISS.  The hooky single “I can swing a hammer” by Wet Secrets became an earworm, and when I learned they performed their act dressed as a high school marching band, the hunt was on.

I found them in a showcase of Western Canada music (Saskatchewan rocks!) in an upstairs bar on 6th Street (the central nervous system for SXSW), whose gracious hosts made sure you had a free cold beer in one hand and in the other, the most delicious free roast beef sandwich I’ve ever tasted. Hail Canada!

The Wet Secrets, with three piece horn section, delivered their engaging Edmontonian power pop, and after the show one wanted to join the band for a big group hug.

Next up were Oh, Pep!, playing another bar down the street in a showcase of Australian musicians. The band, as the name would suggest, was pleasant, with a beat to which you could nod your head (or as they called it, “seat moshing.”) Unlike Canada, Australia made you pay for your beer — crummy cheap country.

I slipped in for half a set of a comedy podcast (half funny) then headed to the “Hype Hotel,” a warehouse and tent city with a line that ran four deep down the street.  As a band’s set has been lasting about thirty to forty minutes, I quickly realized I was probably not going to make the set times of the groups I came to hear — I’d have to seek them out elsewhere.  That, and I didn’t like the feeling that if I was standing still, I was missing something somewhere else.

Huzzah serendipity, as that lead me to a far-flung dive bar where I stumbled into a set by Cosmostanza, three music school students from Oklahoma City who played with such abandon it felt like they were thrilled to have some elbow room instead of practicing in a basement.. Two guitars and a drum, proving if you play loud enough, you can’t hear the bass line anyways. Wherever their careers lead them, I hope they’ll always remember the night they shook the fur off the stuffed animals lining the bar in Austin. Well done.

Like Disneyland, SXSW has a fastpass system, giving priority access to those willing to line up at 7 in the morning for the 9 o’clock giveaway.  Late in the day I stumbled into such a pass for Stubbs (the barbecue venue), which was handed to me like I had one Wonka’s Golden Ticket.   I think going to Stubbs is mandatory when visiting Austin, so I thought I’d take a look.

Tonight’s event was the closing party for the interactive portion of SXSW, and incredibly, an open bar to the thousands of patrons crammed into the event. On stage Biz Markie ‘DJ’ed’ song snippets from the ’80s while a hype man yelled “Remember this one? I can’t hear you!!”

You couldn’t help but think of the scene in Up In The Air (OMAHA!) where George Clooney and company crash an IT party.

That scene lasted one beer, so I crossed the street for the Yuppie Pricks and their over-the-top, tongue-in-cheek (oh, I hope that was the case) Republi-punk. The band played behind a Pink Floyd inspired Donald Trump wall, blasting their manifesto to we south of the border. The show ended with the lead singer stripped down to a stars-and-striped thong, revealing a LaCoste alligator tattooed above his left nipple — you have to admire commitment.

The fun of SXSW is clearly switching gears — moments later down the block I caught L.A. power trio Tennis System who clearly find feedback is their friend, and Vaadat Charigim, an Israeli shoe-gaze band who delivered their gorgeous, ringy, Cure-esque wall of sound under vocals sung entirely in Hebrew.

And if you can’t get into one show (Alt-rapper Lil’ Dickey, whose entourage took up most of the room), cross the street and catch the Woggles and their swinging, crowd-particpatory revival of ’60s Garage Rock, and Peelander-Z, suggesting what you would get if the Ramones had a baby with the Power Rangers.

Spent, I headed back to the crummy motel room only to be lured off the street into another venue by the sound of theramin.  Art rockers The Octopus Project created the art-groove outside, while inside masked Meishi Smile manned three laptops, a mixer and a fog machine to provide the perfect ethereal soundtrack to SXSW at 2 in the morning.