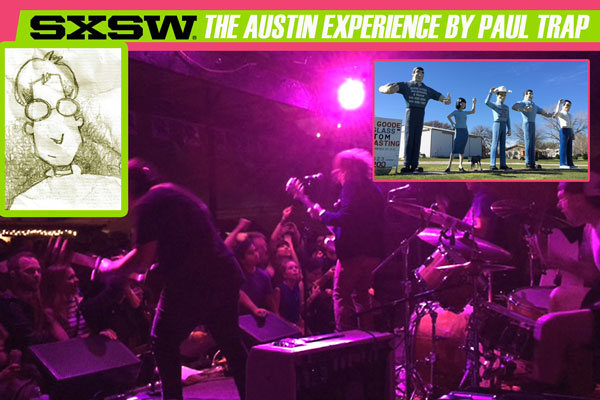 Arrived in Austin late (thanks Dallas traffic), with just enough time to squirt into the end of the AV Club showcase at Barracuda, an indoor/outdoor club that appears to be in great supply in Austin.

Mothers, from Athens, GA, played a short set of their simmering-then-explosive mood rock, followed buzz-band Beach Slang and their giddy Replacement’s-fueled spectacle. It was just what was needed after a long day in the car.

While watching I realized I had just drove 12 hours to see these two bands that have both played O’Leavers in the past few months. A couple notes: First to O’Leavers — thanks for bringing great shows to Omaha. And the second to myself — get out and see more live music in town, more often.

Thinking about the NCAA basketball tourney ahead, and wondering what teams are just happy to be there, and what teams want to advance far into the bracket  — I’m guessing the same can be said for bands that have made the trip to SXSW.  Which groups are just happy to playing the big event in Austin, and what bands want more?  Beach Slang appears to fall into both camps, who are clearly enjoying themselves with 12 shows scheduled over five days.  The thought of hauling that gear around makes my back hurt.

The musical portion of SXSW kicked off officially Tuesay — more to come.