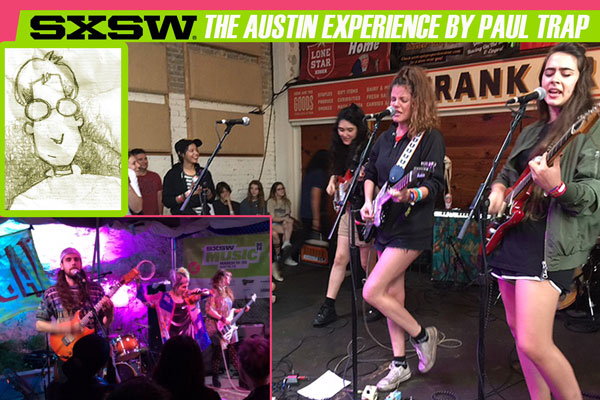 The day started with an 8 a.m. breakfast show at the Four Seasons hotel, with a set by Twin Peaks — I caught them a couple years back in an unheated Omaha warehouse on a cold November night.   I was looking forward to the juxtaposition of seeing the group play at dawn’s early light in a hotel ballroom — the crowd, NPR listeners, with a small army of mothers and their babies, seemed as befuddled with the indie guitar rock as the did the band to their surroundings.  But they did deliver, and I hope those moms will remember their child’s first proper rock and roll show were Twin Peaks.

Internet sleuthing brought me to an early outing by Hinds, one of the festival’s buzziest bands, playing at a sandwich shop.  The all-girl quartet’s California-surf-by-way-of-Madrid sound was much fun, but provided no answers to what makes an ‘it’ band it.   They encouraged to crowd to attend one of their four other shows for the day, and track their loss of sobriety.

I queued up at a venue to catch a couple acts, but quickly realized I was going nowhere with the one-in, one-out policy.  I spoke to a gentleman in line who was planning on waiting up to an hour, then once in stay for another three and just be surprised by the line-up ahead.  Perhaps that’s the frame of mind to attend SXSW, but wanderlust kicked in and I went to plans B,C and D.

Edutainment awaited at the cavernous convention center — I passed over the seminar on ‘how to turn facebook likes into cash’ to hear a Ramones retrospective, paneled by John Doe of X, Seymour Stein who signed the Ramones to Sire Records (and the Pretenders, Talking Heads, Blondie….), and Linda Ramone, who was immediately asked to discuss her roll in the Johnny / Joey love triangle.   Perhaps the highlight was when the panel turned on Stein, who admitted to liking the Eagles — he was forced to recant, leaving it at that he just liked one particular Eagles song.

I then crossed the hall to hear Dion describe the night he gave up his seat on the airplane which would be Buddy Holly’s final flight.  Side note — on your next drive to Minneapolis, take a short spin at the Surf Ballroom (Buddy’s last venue) in Clear Lake Iowa, right off the interstate and a trip into the wayback machine.   The short hike to the crash site is also good adventure.

A mile hike led to the far fringe of the festival, where I caught up with Pwr Bttms, another band gathering a following the festival.  The duo’s quirk rock, with an emphasis on the rock, charmed the masses as did their engaging between song banter on gender, heartbreak and student loans, which is definitely part of the attraction.

Inside the dark recesses of The Grackle (another rough-around-the-edges-and-interior venue) I stumbled upon my favorite discovery of SXSW.   Admittedly the abundance of garage rock begins to blend together, but the sound of Spook School stood out with their propulsive rhythm and their four members hanging on for dear life.  It’s great to hear kids who not only get it, but clearly are in love being in a band.

Mercury Girls, another new favorite, followed, who are the reincarnation of Velocity Girl, and not a moment to soon.

The standouts of the nightcap were played within a bandshell carved out of a cliffside — the irresistible sunny pop of Tacocat, followed by Shannon and the Clams (now a foursome with one additional clam) and their Buddy Holly-under-the-sea-sound.   John Waters, please make a road movie about this band.

Suddenly it was 2 am, and it was a long drive back to the Motel 6 to reunite with my arthropod friends.

That’s it for now.  My musical advisor suggested heading out prior to the weekend before the festival implodes with spring-break mass — that, and a lack of Friday/Saturday lodging (book early!) had me say a reluctant farewell to SXSW.

An illustrated wrap up to come.   But now that I’ve begun to uncrack the code of SXSW, I look forward to another helping.