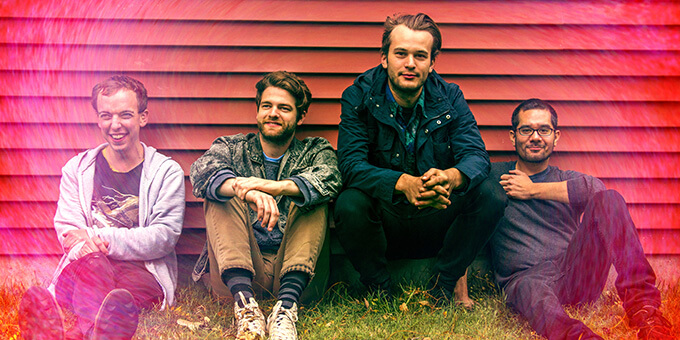 It’s a relatively dim dive in the heart of Benson, home to such well-lit and sharply decorated establishments as Lot 2, Krug Park, Benson Brewery, Infusion Brewing and 1912. The bar feels like a final stronghold against tasteful white-washing.

The four members of Omaha indie rock band Twinsmith huddle at one end of the bar alternately joking with the bartender and drinking cheap beer. One of the bar’s few other patrons, the kind who looks like a regular, places a bet on a Keno game.

“I don’t think I’ve ever played Keno,” says vocalist-guitarist Jordan Smith. “I don’t even think I know how.”

Smith fronts the band, which releases its second album, Alligator Years at The Slowdown on May 15 with Healer and State Disco, and could arguably serve as Twinsmith’s mascot, too. His lighthearted ease of presence extends and envelopes those around him, not unlike Twinsmith’s own fun-first sound.

The rest of the lineup is made up by Matt Regner on guitar and keyboard, Bill Sharp on bass and Oliver Morgan on drums. Sitting with them, all earnest laughter mined from barely-uttered inside jokes, you could believe they started a band only as an excuse to keep hanging out with each other.

Morgan, the band’s elder statesman, takes it on himself to teach Smith the rules of Keno. He grabs a card and begins checking boxes, explaining as he goes. Where for Smith, Regner and Sharp Twinsmith is a first effort at recording and touring seriously, at making a go of it, so to speak, Morgan has been here before.

He played drums in Omaha’s Landing on the Moon and drummed for Little Brazil from 2004 to 2012, the band’s most productive years, including three releases on Mt. Fuji Records and one on Anodyne.

After a thought, he decides he may as well play the Keno card he’s already filled out.

“Eight and 18, five bucks a game,” he tells the bartender.

Smith’s takeaway from the lesson: “So you don’t have to pay attention and you lose a bunch of money? I already do that.”

In a way, that sentiment resonates for a band who has spent the better part of 2015 out on the road, playing shows all over the country that swing between moderately well-attended and desperately empty depending on the weather, the local talent, the promoter, whatever else was happening in the city that night. When the goal on a several week venture is simply to break even, it must feel a bit like gambling.

On the other hand, Smith’s blithe remarks thinly veil the reality of being Twinsmith two weeks out from the release of Alligator Years.

Saddle Creek Records, Omaha’s strongest foothold in national relevance, announced in November they’d signed Twinsmith for the record’s release. They’ve had song premieres on AV Club, Culture Collide and Pure Volume and a few weeks ago were featured on NPR’s “All Songs Considered.”

On the first leg of the 2015 tour, Twinsmith played eight nights on the west coast opening for Cursive. That meant sold out shows at ballrooms and venues, that, as the band puts it, “actually have bathrooms.”

The rest of the band’s spring dates included a stint on the east coast, a northeastern blizzard, cancelled shows and a broken-down van sprinkled among some meaningful successes: Atlanta and Chicago are two cities the band recalls fondly.

But even with its ups and downs, Regner says the band succeeded at treating the operation less like a vacation, as with shorter tours in the past, and more like an actual investment of time, money and energy.

“With Cursive, we started off on a really professional note,” Regner says. “Those guys run a tight ship. We carried that through the rest of our own tour. That was the first time we’ve ever done that.”

Maintaining that professionalism means playing well through the shows that were promoted poorly and always trying to build connections, even in the middle of tiring weeks on the road.

“It doesn’t matter if you’ve had a great show in a certain market a few months ago,” Morgan says. “It boils down to the relationships you make and solidify.”

Like the band’s nation-sprawling tours, Alligator Years finds Twinsmith bigger and more focused than the self-titled debut they scrambled to write and record two years ago.

“We had studio time booked for another band, Betsy Wells, and then Betsy Wells called it quits,” Smith says.

Regner says he, Smith and Sharp, who played together in Betsy Wells, had a choice: drop the studio time or form a new project with a different direction and write music for it in the few weeks before the scheduled studio time. They hadn’t played a show, they didn’t have a name, they didn’t even have a full-time drummer. The result is a record that, while promising, is rough and without direction.

“We really didn’t have an identity when we did that,” Regner says.

So in many ways, the new album feels like somewhat like a premiere: here is a band with a full lineup and a vision.

For Alligator Years, Twinsmith worked with Luke Pettipoole of The Envy Corps out of The Sonic Factory in Des Moines. Regner says Pettipoole became like a fifth member of the band for the record. The album feels sharp in its rhythms and quick-witted in its melodies. It’s dangerous to call a sound, and more dangerous a band, on-trend. Those observations become passé at the moment of recognition.

But it’s hard not to look at Twinsmith in the context of the greater national indie scene and draw some comparisons. There are bits of early Vampire Weekend, syncopated and light. Smith’s propensity for using every vocal tool he has, from tuneful crooning to choppy yelps, recalls Future Islands. The album’s production feels, at times, as big as Arcade Fire scaled way-down in terms of self-seriousness.

Intentionally or not, the band is riding a wave.

That wave is part expectation too, or maybe hopefulness. All four members of the band say they don’t feel any pressure to succeed on behalf of Omaha.

Regner says the only pressure they feel is internal, the pressure to reach a national level. That’s their goal, after all. To make a living in a touring band. Doing that in any kind of sustainable way means reaching wide audiences.

“We’re not carrying a torch,” Regner says. “We’re just doing our thing with a national mindset.”

But anytime a music act from a scene as lively and proud as Omaha’s gains momentum, flirts with a national spotlight, the thought is there.

Will this be the one to launch our scene into the national sphere of consciousness?

Maybe, maybe not. The music industry decimates dozens of bands every day as talented as Twinsmith. But it’s fun for a local music fan to think so.

And besides, that hopefulness is all part of the gamble.

Morgan returns to the band’s table with a wide grin after checking his Keno scores.