Home » Music » Two for the Shows 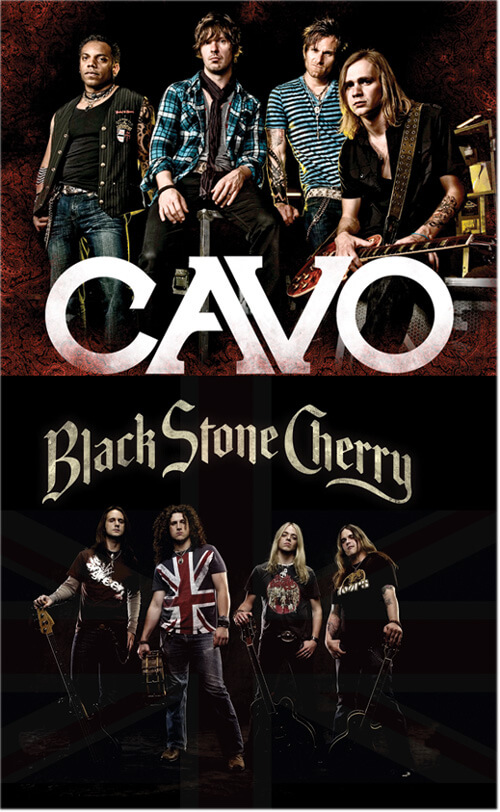 “Making it” in the music industry can be quite the arduous journey. Maintaining prolonged success can prove to be even more difficult. What may be the hardest hurdle of all, though, is how a band responds to reaching the pinnacle of their music rock’n’roll dreams. Enter two bands who’ve traversed this path, albeit, with different outcomes. The Kentucky- based Black Stone Cherry and the St. Louis band Cavo.

I caught up with both bands’ frontmen in anticipation for their co-headlined tour together and free viewer appreciation concert at The Waiting Room in conjunction with The CW’s programs, “Vampire Diaries” and “The Secret Circle” to support their bands’ latest full length albums, Between the Devil and the Deep Blue Sea (BSC) and Thick as Thieves (Cavo).

BSC seemed destined for success as their drummer, John Fred Young’s, father, Richard Young, was the rhythm guitarist for the grammy-award-winning country band, The Kentucky Headhunters. This is where both bands’ paths to stardom diverge, highlighted by the parity of content on their albums.

Between the Devil and the Deep Blue Sea is a feel good southern rock’n’roll album chock full of catchy hooks to get you up off you butt and grooving, highlighted by the singles “White Trash Millionaire” and “Blame it on the Boom Boom.”

Says the recently married Chris Roberston of BSC about “White Trash Millionaire,” “We were trying to write a fun song, nothing serious.”

In contrast to BSC, Cavo’s Casey Walker painted a much different picture in reference to their second album, released after a falling out of sorts between members of the band that jeopardized their future together. “We were writing the song (‘Thick as Thieves’) from our new stand point — it’s us against the world again. The song just kind of fell out, came out of no where. This song is sort of what the whole album is about.”

Although Walker didn’t directly say it, he gave the impression that suddenly striking fame, having to tour constantly and pressure to maintain that success stressed relationships between the members of Cavo. BSC was bred to handle such situations having grownup with each other and witnessing firsthand the problems a nationally touring group has to deal with.

In the end, Robertson and Walker agreed that what makes their bands tick is their love for writing great songs their fans can identify with. Although, they disagree on the topic of werewolves and vampires, the theme of the CW’s free concert. Says Robertson, “I’m a werewolf guy. Vampires are just creepy man.” Walker, on the other hand, disagreed. “Vampires, like Kate Beckinsale, I’m all about. She’s one the hottest chicks on the planet.” Agreed.