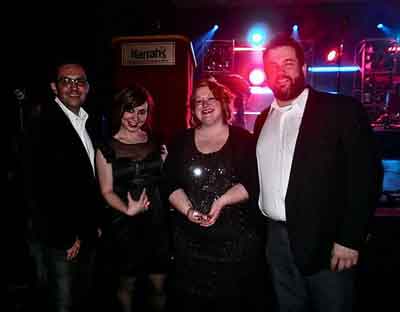 As Rebecca Lowry became captivated by ukulele performers on YouTube, she decided she just had to get in on the action. The ukulele led to songs and the songs led to All Young Girls Are Machine Guns, Lowry’s musical project that is now a four-piece band. The band is just releasing its self-titled album, which is Lowry’s second release since she started playing solo shows back in September 2008. The band name stems from a conversation she had with a friend after reading Lolita, who told her “all young girls are machine guns.” “It’s the kind of the intense book that you want to get something out of,” she says. “I had the band name before I ever played.” The ukulele is all Lowry plays and all she plans to play. She started posting her own YouTube videos and it evolved from there. The ukukulele elele goes with her voice and the swinging style of jazzy pop that the band plays. She never got caught up in the ukulele as anything other than a fun instrument to play. “I never treated it like it was something precious,” Lowry says. “It’s just the vehicle that happens to help make music.” Economics helped out too, as ukuleles are much less expensive than the guitars Lowry was around when she worked at Dietze Music. The size is perfect too, she says. “I like what I got. It works for me, because I got these small hands,” Lowry says. Lowry culls her style from a love of swing and jazz. She even played DJ at Omaha Jitterbugs dance events for about two years. She jumps off from that on the new CD, with nods toward indie music, soul pop and adult-contemporary. It’s a sound that should appeal to Billie Holiday fans and She & Him fans alike. As Lowry’s performances continued, she ended up assembling a band with bass player Travis Sing and drummer Scott Zimmerman. The last piece to the ensemble was violinist Kaitlyn Filippini. At first, she only played on a few songs, but the band kept finding ways to incorporate her on more and more songs. The band then recorded the self-titled CD over three or four month with Sing in his eight-track basement studio space. “I feel like it sounds like what we sound like when we’re actually playing a show. It’s just a little more intimate,” Lowry says. There’s a few songs revisited few from her first recording, but revived in a full-band format. There’s a ton of other material she’s written in the few years she’s been playing, enough for three more CD’s. She says she culled the selections from songs that have gone over well at live shows. “I feel like it’s kind of a best-of so far,” Lowry says. Lowry says she pushed to get the CD out now, once she booked a show with the Betties and Honey & Darling. At the release show, there will be a little bit of role reversal too. Lowry’s sister Kristin Pikop will sing background vocals on a few songs. “She’s kind of always been the voice of the house,” Lowry says. All Young Girls Are Machine Guns w/ Honey & Darling and the Betties play a CD release show at the Waiting Room Lounge, 6212 Maple St., Friday, May 20 at 9 p.m. Tickets are $7 at the door. For more information, visit onepercentproductions.com.