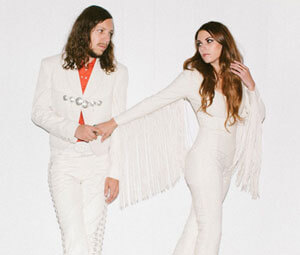 Take Quentin Tarantino’s Django Unchained and match it to his other thriller slasher film, Death Proof. Specifically, the scene where Kurt Russel gets a lap dance from Vanessa Ferlito. Put it in slow motion and you get the perfect setting for the spaghetti western slow draw washed out sound of Nashville Tennessee’s Escondido. Their multi-instrumentalist and vocalist, Tyler James, agrees with that assessment.

Laughing, James revealed, “Yeah, there’s definitely a couple songs on the record that, after we got done (recording) we’re like, ‘Man, this could totally be on a strip club soundtrack.”

All joking aside, Escondido has got chops. While the band is still fresh, James and front woman Jessica Maros have been in the scene for quite a while. James cut his teeth with Edward Sharp and the Magnetic Zeros for a couple of years before hitting the record button during an impromptu song performed by Maros while some mutual friends were over at his house for a recording session. The chemistry was instant and soon the two formed Escondido, with James selecting the rest of the members to round out the band.

Their debut album, The Ghosts of Escondido, was recorded live in a single day a couple of years ago by James and released this past February. James threw his usual time consuming, detail oriented approach out the window. Instead, he settled on a more organic approach, recording each song three times and tracking the best of the bunch. His new direction in recording laid the foundation for the band’s atmospheric sound. It wasn’t necessarily a conscious decision.

James and Maros went on to explain their process of recording and molding their sound, time spent together as a band and the Nashville music scene.

Was it your plan before recording to get everything down in one day or did your chemistry lend itself to that?

James: It was a mixture of everything. I like recordings that are not over thought. I had been working on a solo record before this for like seven months. I over analyzed every little tiny thing. I wanted to try something different. A lot of my favorite records, like Bob Dylan and Neil Young records and made the same way.

Maros: Tyler picked the right band members. I never really knew any of them before the day we recorded. We had one two hour rehearsal. It was just like bang! Now they’re our main dudes.

When you guys decided to form a band, did you have an idea of what type of sound you wanted to capture?

Maros: Tyler is really into Ennio Morricone. We used to just sit and listen to him. We didn’t really plan to have this sound. The songs led us in that direction.

James: The record turned out much more highly stylized then we planned. Tracking it in one room in one day, you don’t have time to go back. It’s like, ‘Well, I guess this is what we sound like today.’ There’s a lot of influences in it though. I was listening to a lot of Tom Petty when we were making it. I’m really into the ’60s and ’70s stuff.

Not knowing each other and jumping right into recording and touring, how has it been just being around each other all the time?

James: We’re kind of like an old married couple at this point. We met and were friends and got to know each other quickly. After we did the record we didn’t have anything going on but, we missed hanging out together. We started dating but, broke up because we realized we really are just an old married couple.

Maros: At the end of the day, we’re best friends. We love the music that we’re doing. We’ve been together the past three months touring nonstop trying to get the word out there. We just got a manager about a month ago. Everything we’ve done has really been on our own. We really push each other.

Where do you see the Nashville scene headed with the influx of big name musicians, such as The Black Keys, Jack White, Kings of Leon, setting up camp there? How do you see yourselves fitting into that picture?

James: We’ve both been there a long time. It’s transformed before our eyes and we’ve been there since the beginning of that. We have a great community of friends and artists. No matter what’s changing, the common denominator is good music and good songs. The Black Keys, Jack White and Kings of Leon, they moved there because it was already happening. That scene has been happening there for a long time.

Maros: I don’t think it’s really changed. It’s a whole new group of people doing the same thing they did back in the ’60s . We’re all very supportive of each other. Everyone is so talented that it really pushes you to be better and really hone in on what it you want to try to say as an artist. When I first heard about Nashville I thought it was all country music. I showed up and realized there is this whole other world of underground indie rock. It’s interesting that the town has that stereotype but, I’m really proud of the direction it’s heading.