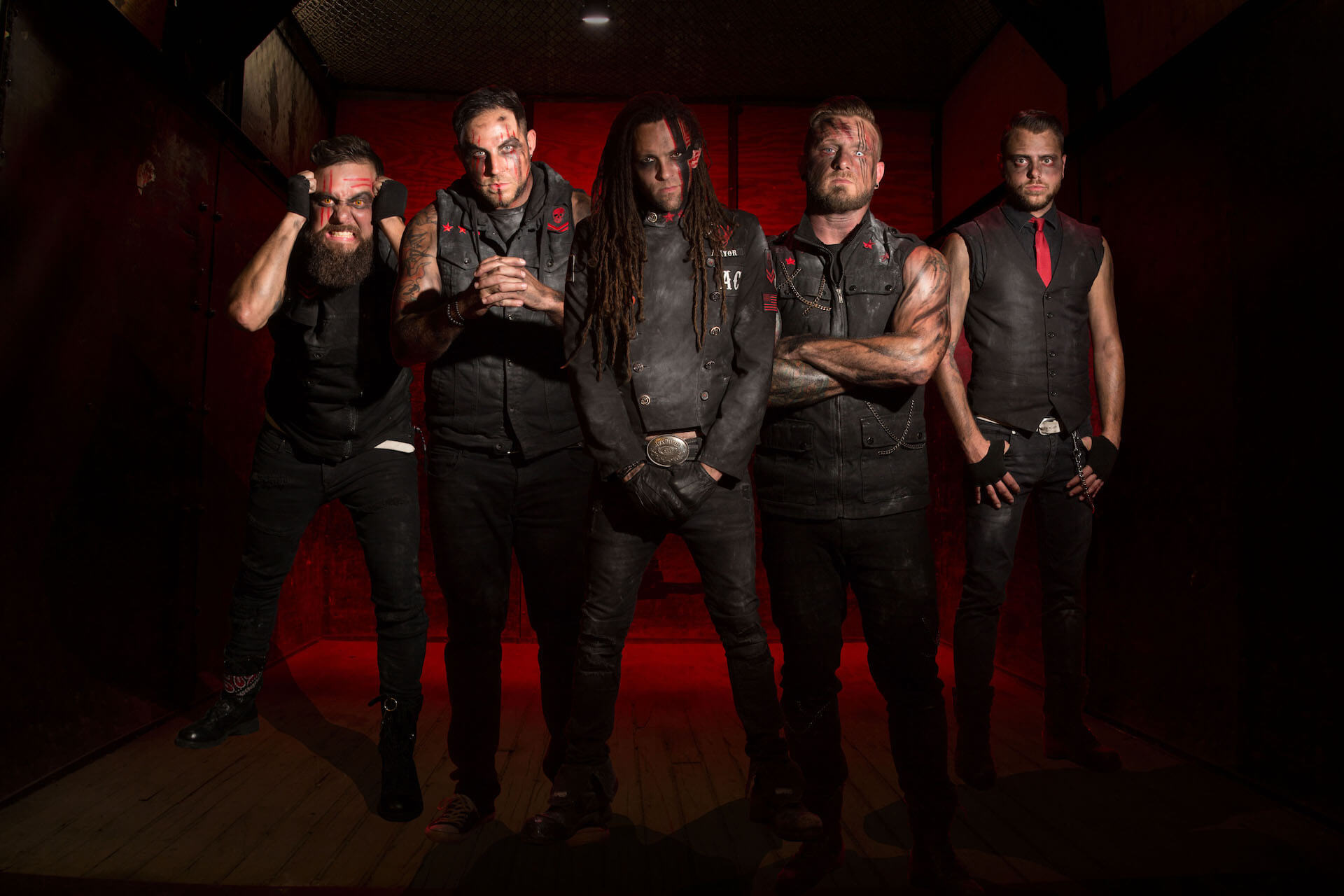 It’s a tale of two cities: one of enterprise, another of fire. In Omaha, the family men and nine-to-fivers Mark Beckenhauer, Patrick Wilson, Matt Denker, Matt Oliver and Matt Dibaise hold normal employment as a landscaper, a granite fabricator, a welder, an electrician and a social worker, respectively.

In Arson City, they are The Doctor, The Mayor, The Enforcer, The Con and The Dealer — a hard rock act branding themselves nationally for their post-apocalyptic motifs, massive walls of sound and a top-shelf stage production. The quintet were a pleasure to talk with backstage of The Waiting Room before their third annual Citizen’s Ball, which kicked off an aggressive, seven-show, eight-day campaign spanning half the country.

The guys seemed to have nothing in common with the personas they assumed later that evening after the proverbial curtains opened: It was all beards and dreadlocks and Mohawks and black makeup and a full-tilt stage show that at times consisted of as many as 11 individuals on stage, including the band themselves, plus zombie burlesque dancers and additional steel-drum percussionists known as the Horror Squad.

Their fans, self-proclaimed “Citizens” of Arson City, have also embraced the imagery and mythology of this rapidly growing band, creating unique characters for themselves and attending concerts dressed to the nines, giving an onlooker the sensation of walking onto the set of the latest Mad Max film.

“It was crazy,” guitarist and songwriter Mark Beckenhauer said. “People started showing up in costume immediately.” The band had yet to play its first show before realizing fans were creating characters.

“We did storylines prior to actually playing,” drummer Matt Denker said. “We were just having fun. We’re not trying to be a gimmick band…”

“But we totally are,” interjected Wilson. “We waited until we were grown up to dress up.”

“It’s a style,” continued Denker. “Every practice, it’s like your best friends – you have some beers, you watch the games, and you start spittin’ ideas at each other. It took hold almost immediately. We said, ‘We might have something bigger than we thought.’ We took complete advantage of the situation. We said, ‘What if we do a Citizen’s Ball? Let’s give back to the fans.’ We have so many loyal friends and fans, our hearts go out to these people.”

Their efforts paid off. The band was recently signed by The 517 Label after winning a battle of the bands at the Hard Rock Casino in Sioux City last April — a win that earned them a cash reward and the opportunity to play the Hard Rock Casino in Las Vegas last September. On being contacted by the record label, bassist Matt Oliver said, “It was kind of out of the blue. Two months after we won, Mark gets this message … ”

“I thought it looked like a crock of shit,” Wilson said.

But that message turned out to be from Mike Goodman, an executive at The 517 Agency. “He’s somebody that’s got a lot of drive,” Beckenhauer explained. “He’s a musician himself, so now he’s in a position where he can help another band — push something that he believes in. He sold it on us, and he’s a hell of a guy.” Two weeks after Arson City spoke with the label, Goodman flew to Omaha to personally sign the band.

“We weren’t even looking for offers,” Wilson said. “We all have families, you know. No label is going to fund us the amount we need to support our children.”

“We always joked,” Oliver said. “There’s no way we’d be able to do this without something like this happening.”

“Someone who could invest in us,” Beckenhauer said. “Someone who really believed, instead of just wanting to make money.”

Their fortunes might not have ever changed, however, had it not been for the band’s serendipitous inception. Arson City rose from the ashes of two previous Omaha-based bands, Emphatic and The Wreckage, who essentially swapped vocalists.

“It’s strange how we just flip-flopped singers,” Wilson said. “I left Emphatic and I thought I was going to be done, but I was lyin’ to myself. Then Denker got a hold of me and said, ‘What do you think about coming to work with us?’ I knew they were all good musicians, and I was like, ‘Yeah, I will.’ It wasn’t like starting a project with a bunch of guys I didn’t know, I was comfortable with these guys.”

“We were motivated,” Denker said. “We didn’t want to sit around and wait, because you never know what’s going to happen. So we just kind of took charge.”

One phone call, three bottles of whiskey and a Husker game was all it took to get Arson City into a rehearsal space. Just three years later, the band already has two EPs and one full-length album — 2015’s The Horror Show — in their discography and they’re primed to be 2017’s breakout band of the year. The act is working on new music, traveling for shows every weekend for the next six months and maintaining day jobs to support their families in between.

“This is definitely a balancing act,” Wilson said. “We have strong families behind us that are definitely going make sacrifices for us, and we’re very fortunate to have that, ‘cause a lot of people don’t. It’s good to have a strong backbone behind you.”

These salt-of-the-earth workhorses deserve every bit of success that’s coming to them, and while they may not be pushing any musical boundaries, and this brand of theater has been touched upon by more bands than you can brandish your torches at, the lasting impression one receives after witnessing performances such as the eponymous album track “The Horror Show” and the downtempo “Not Coming Home” is enough to dispel doubt as to where this band is going, which is straight to the top. From the wild podium-preaching howls of vocalist Wilson, to the succinct yet skillful solos of lead guitarist Dibaise, to the tandem-drumming of Denker and his ghoulish Horror Squad, watching Arson City live feels like you’re being gifted something that no one else has.

“Even just the live show,” Beckenhauer agreed. “It’s a production, and for a local band, we try really hard.”

True to their humble nature, the band has left it up to me to set the record straight: Say what you will about Arson City, their stage show is better than yours.