Home » Music » What’s Up with Chuck 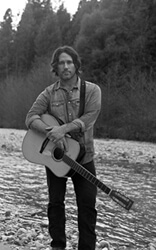 Chuck Ragan is a busy man. The frontman for the Gainesville, Florida, punk rock band Hot Water Musicians has been touring nonstop, working on solo albums, scoring films and writing books. I first caught up with Ragan last year when he was in the middle of his collaborative acoustic event, The Revival Tour. It featured multiple artists ad a ton of show dates crammed into a short amount of time. Today, one year later, the artist’s pace hasn’t slowed.

Ragan’s rugged and eroded voice eludes to the amount of time he has spent on the road for years now. His singing style doesn’t really help that either but, he continues to belt it out night after night in enthusiastic fashion. The man bleeds passion for his music.

After The Revival Tour wrapped up earlier this year, Ragan wasted no time hopping back into the saddle and into the studio to work on his next album, which has yet to even be named, let alone a date set for release. Says Ragan: “We’re in the very early stages of making the record. The cool thing about it to me right now is that I don’t have any deadlines on me. I don’t want to rush it. I want everybody who is involved to be as stoked and as comfortable as possible before we take another step forward. It’s a great feeling to have. I haven’t been in that position many times in my life. Whenever we decide to call it a record and it feels good, we’ll deal with it then.”

Ragan says that his work on the forthcoming album carries the same sound as his last effort, Covering Ground, but that sound has definitely broadened from the influences he picked up from the many artists he featured on The Revival Tour. “We’re coming up on the seventh year (of The Revival Tour) and we’ve hosted well over 100 artists and all of them have been an inspiration and an influence. People from Cory Branan, Emily Barker, Tim Barrett and Ben Nichols. There’s just so many and they’ve been a huge inspiration. I’ve got a lot of classic favorites but, what really drives me the most are the people that are doing stuff right now.”

Ragan went on to describe how time spent on a tour bus with that many musicians really lends itself to the sharing of ideas. “It’s just a bunch of songwriters all piled on a tour bus. We’re getting to know each other. We’re talking ethics, politics, music and sharing coffee and working on songs together. It’s such a healthy positive experience. It really has opened my mind and revived me in not just music but, working and friendship.”

While his current tour is more in support of his last studio effort, Covering Ground, Ragan has been playing a couple of new songs from his current project. He just got back from a three week stint in Europe where he introduced the early rendition of these scores.

“The true test is when you play the song live,” he says. “There’s something about getting in front of a crowd of people and no one knows the song. No one is singing along and there isn’t a whole lot of energy coming back at you. You basically have to rely on the structure and energy of the song to carry itself at that point. That’s when you find out what works or if you’re just beating a dead horse. It’s a great way to work the songs out. It’s also a great way to cut loose and do something that scares you a little bit.”

Ragan also has worked on some collaborative efforts recently, writing music for photographer Scott Toepfer’s video project It’s Better in the Wind. Did I mention he’s a busy guy?

“(Toepfer) asked me to be a part of that and write the music for it. He sent me some videos and photos that I used to create the music. He rides motorcycles and he and some of his friends will ride out into the desert on the open road, sleep under the stars and find adventures. His film embodies that attitude.”

Ragan says one song from that video, “Bedroll Lullaby,” will be played on the tour. “We did a version of it that’s just a whole other animal then what is on the It’s Better in the Wind soundtrack. We’ve been playing that one quite a bit.”

When asked if projects like “It’s Better in the Wind” is something he would like to do more of, Ragan’s voice picked up a little bit. “I would love to. I love writing for film. I haven’t done much of it because I’ve always been touring and working on records. But, I’ve had a few opportunities and I would love to do as much as possible. I really enjoy sitting down with someone who has a vision and is asking me to put music to it. It’s just a wonderful way for me to approach a thought process and building a song that will explain their story in a way that embellishes what they are trying to get across.”, Ragan enthusiastically explained.

With all of Ragan’s extensive touring and recording for the past two decades, I asked him where he sees himself in 10 years. “That’s a great question my friend.”, he said laughing. “I don’t know. Can anyone really answer that question? I love writing and playing music but, I’m also a home body. I’m happily married and have a couple of dogs. I don’t have any children but, I would love to have them. Who knows. When that comes into play it could completely change everything.”

Ragan went on to tell me about yet another project he completed not long ago. He compiled a book of road stories from various artists and their crews that have traveled all over for most of their lives. It’s titled The Road Most Traveled. He’s been working on a second installment of that book along with another book that he’s been slowly piecing together for the past few years.

Says Ragan: “I’d love to continue doing that. Just writing. Making music to me is the best part. Making music with people that I respect and love. As far as making music, I want to keep doing it until I’m physically or mentally incapable of it.”