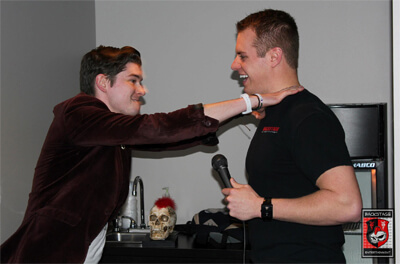 The Waiting Room in Omaha, NE, hosted a couple of solo artists on Sunday, April 14th. William Beckett headlined the night with support from Jillette Johnson. The two have been on tour for a little while now and their last show was in Omaha that night. While touring together, they’ve gotten to know each other pretty well and now are good friends. Both artists had some time to do an interview with Backstage Entertainment and got to share funny stories from the road and talk about their music.

In the interview with William Beckett, he talked about release a few different EPs last year and now working on his first Equal Vision Records full length album being released in the future. As he dipped into our “BSE Box” he got to share a funny story of how he got in a minor car accident after something he saw in another car. Also stories from the road with Jillette, what he does for his pre and post show routines, and while acting like he was on “The Jerry Springer Show,” who he’d want to hang out with for a day.

As William told Jillette about the fun interview she was up for, Jillette came into our interview excited and open-minded. Jillette talked about her new album coming out in June called “Water in a Whale” and the current EP she has out now. One of her songs, “Pauvre Coeur,” she gets asked all the time how to pronounce it. To me it sounds like (poe-vruh core), but I asked her if she ever thought about naming it something simple. She has thought about it since the name means poor heart but then she wanted a unique name which fans would remember the song by. We also talked about the inspiration and idea behind the music video for the song and what led her to the decision to be in the attire she was in for the shoot.