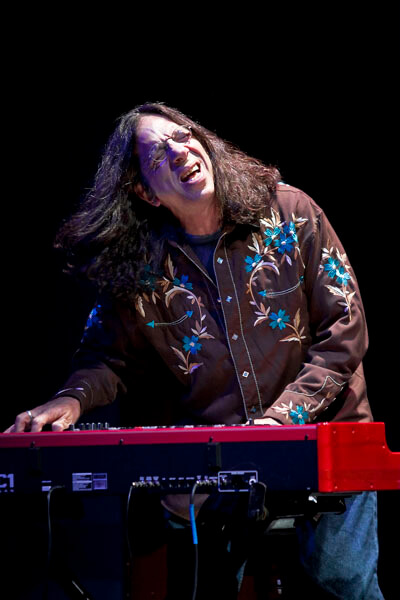 The great music is stacking up for the weekend with shows including the legendary Edgar Winter and his band at Waiting Room on Sunday, June 18. Bennie & The Gents open with their glam-rock tribute show at 8 p.m. Tickets are $40 in advance. See waitingroomlounge.com/event/edgar-winter-band.

Saturday’s shows include an appearance by Blue House & The Rent To Own Horns at The 21st Saloon, 8-11 p.m.

Local horn man Matt Wallace has several gigs around town with his friends The Hegg Brothers and Greg Ahl. Catch them throwing down their jazz sounds Friday and Saturday, June 17 and 18, at Havana Garage 8-midnight. Sunday they roll into the Harney Street Tavern for an 8 p.m. show.

The inaugural River City Music Festival is happening at Bellevue’s Sokol Park  Saturday, June 18, with headliners the legendary George Clinton & Parliament Funkadelic plus Matisyahu. Also performing are After Funk, Filabusta and hometown favorites Satchel Grande. Keller Williams is no longer scheduled to appear, according to the event’s Facebook page. The park opens at 3 p.m. See the lineup, ticket info and all the details at omaharivercitymusicfestival.com.

Hector Anchondo Band is up at the Slowdown’s CWS stage Sunday afternoon. They play two sets, one after game one and one after game two. Satchel Grande and Rothsteen are up Friday, June 17, at 9 p.m. See the full schedule at  theslowdown.com/shows.cfm.

Katz is one of the top contemporary keyboard/Hammond B3 players around, playing music inspired by New Orleans R&B, “soul-jazz” and boogie-woogie. Last year Katz and his band were working hard on the road with U.S. tours and two tours of Europe. They are working on their next recording. Their most recent disc is Homecoming.  Living Blues magazine wrote, “Homecoming is an album that’s filled with nothing short of breathtaking blues highs.” See brucekatzband.com.

Katz is a multiple Blues Music Award nominee for the Pinetop Perkins Piano Player of the Year ward. Katz is also a master teacher who taught for 14 years at the Berklee College of Music and holds master classes in B3 and teaches blues history classes. Bruce spent some time over the last few years as the touring keyboard player for The Allman Brothers, Delbert McClinton, John Hammond and more. Katz toured with Gregg Allman’s band from 2007 to 2013. Allman says, “He can play jazz, blues, Bach, anything, man, he’s a heavy!” while John Hammond raves, “This man is as good as it gets. One of the greatest keyboard artists I’ve ever heard!”

Josh Hoyer & Soul Colossal have their first European tour slated for March and April 2017. The band has their summer tour kick-off show Thursday, June 23, at Lincoln’s Bourbon Theatre. Their summer run includes a gig at Portland, Oregon’s, prestigious Waterfront Blues Festival. Check out this cool video that shows the band on the road preparing, rehearsing, performing and reflecting on their recent Tennessee Performing Arts Center show as the opener for The Legendary Muscle Shoals Revue in Nashville.

And mark your calendar now for great jump-blues, Chicago blues and more at The Waiting Room Tuesday, June 28, 8 p.m. when Hoodoo favorites Doug Deming & The Jewel Tones featuring Dennis Gruenling take the big stage as part of their five-week tour. These East Coast players are as good as contemporary blues gets with Deming’s sparkling and spanking guitar work and Gruenling’s monster harmonica chops. Get out and support this cool blues gig at The Waiting Room.

Gruenling has a brand new disc Ready or Not (VizzTone), featuring all-original tunes with Gruenling taking the vocal duties on music in a “1950s rock ‘n’ roll/rhythm ‘n’ blues vein.” Deming and Jewel Tones’ bassist Andrew Gohman back Gruenling on the disc. And, shhhhh! There will be advance copies of the disc, slated for a July 22 release, at the gig. Check them out at reverbnation.com/dougdemingdennisgruenling.

The first of two summer Playing With Fire free blues concerts is slated for Saturday, July 2, at Midtown Crossing’s Turner Park. Playing With Fire returns to Saturdays this summer with a terrific roster of artists. One of the current scene’s most engaging and entertaining blues artists, Sugaray Rayford, headlines the free show with Andria Simone & Those Guys, the Nick Schnebelen Band and BluesEd band Far & Wide.  Mark your calendars now for this show and the Saturday, Aug. 27, show, when Walter Trout headlines. See playingwithfireomaha.net.

Lincoln’s Zoo Bar celebrates its 43rd Anniversary with its annual ZooFest street party Friday and Saturday, July 8 and 9 featuring artists including Lee Fields & The Impressions, Terrance Simien, Mike Zito & The Wheel, Brave Combo, Dale Watson, The Derailers and Nikki Hill. A little bird told me that the indoor schedule will include Hoodoo hero Jon Dee Graham with his electric Austin trio on July 6. Watch for late-breaking shows, fest updates and details at zoobar.com.

And finally, want to beat the heat with some cool blues Friday night (June 15), catch this just in from Hadden Sayers:  “Facebook friends, the Hadden Sayers Band will perform live on Facebook from our show in Joplin, MO at 7 PM central time! Go to The Coda Concert House and enjoy the show! Check it out here:  facebook.com/TheCodaConcertHouse.”