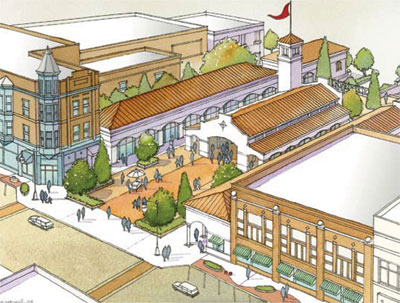 South Omaha has always been the home of industry and immigrants. The languages change, the residents keep coming from new and different locations, the jobs are constantly evolving but the neighborhood itself has always been Omaha’s melting pot. It’s defined by two things: hope and hard work. That’s why they come and that’s what they do. And while South Omaha has displayed a remarkable ability to build itself into what its residents need – from the Bohemian haunts of yesteryear to today’s mom-and-pop tiendas – the city is in the beginning stages of helping to shape that vision for the future. On June 8, the Greater Omaha Chamber of Commerce updated nearly 100 citizens on the progress of the South Omaha Development Project (SODP) at a community meeting on the campus of Metropolitan Community College. The project, which has been adopted as part of the city’s long-term master plan, follows similar redevelopment projects undertaken by the Chamber in Midtown, North Downtown and North Omaha. Mayor Jim Suttle identified four key areas of focus in his opening remarks to the crowd. One, strengthen family-owned businesses. Two, get industrial operations up and running on industrially-zoned land. Three, increase affordable housing. Four, create an umbrella organization capable of uniting efforts to reach these goals. “Plan the work and work the plan,” were Suttle’s words of advice as the SODP moves from the planning phase towards implementation. Karen Mavropoulos is taking the lead. A project manager with Catholic Charities and adjunct instructor at MCC, Mavropoulos was named SODP project coordinator last March. The appointment was one of the first major steps toward implementation in the project’s first two years of existence. The other was reaching out to the community. Mavropoulos says her team has spoken with more than 2,000 community members to get their input on the changes they want to see in their neighborhood. “The planning process was designed to reach as many people in the South Omaha community as possible,” she says. “The project is proof of how important community engagement is at all levels, and it demonstrates that when a community works together great things happen.” One of the first changes residents will see as part of the SODP is a renewed commitment to the Vinton Street business district. One of only a handful of commercial districts on the National Register of Historic Places, Vinton Street business owners are already working together to revive the Vinton Street Merchants Association and are in the beginning stages of putting together a façade restoration program. Industry is another key component of the early stages of the SODP. Mavropoulos says the board has identified a number of new lots for industrial development, has began working on potential redevelopment concepts and is now looking to lure businesses to South Omaha. The third major initiative of the early implementation phase is creating an affordable housing organization devoted solely to South Omaha. As part of the project’s planning phase last year, Habitat for Humanity partnered with the Deer Park Neighborhood Association to create the Habitat for Humanity Revitalization Initiative, a block-by-block approach to identifying housing rehab needs. It’s the sort of agency-community collaboration that will come to define the SODP. “The South Omaha Development Project is dedicated to a more vibrant South Omaha, but we are not acting alone,” Mavropoulos says. “Our effort builds on and supports the great work that was already being done in the community.” The one thing residents of South Omaha won’t see in the months and years to come is a lack of long-term commitment to the project. “We’ve been here a long time and we plan to be here a long time,” said David Brown, president and CEO of the Greater Omaha Chamber, at the meeting last week. The people of South Omaha applauded. For more information and an online version of the SODP master plan, available in both English and Spanish, visit omahachamber.org/sodp.