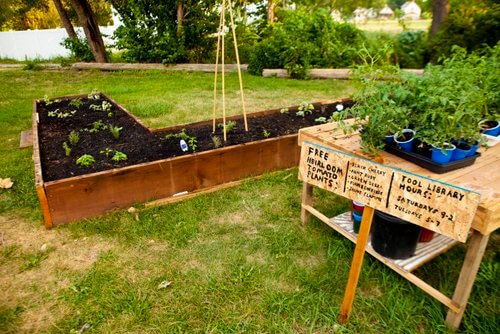 The days when North 24th Street jumped with folks out on the town, strolling the main drag, hitting one live music spot after another, are decades past.

Aside from biennial homecoming activities, North 24th is a drive-through artery on the way to somewhere else. Few souls trod its walkways. If people do stop it’s for Sunday sanctification, a haircut, a fill-up or some social service business.

There’s little else to see or do. Food options are mostly confined to the fast variety and small bars pass for nightclubs. Vacant tracts of land abound.

But a welling synergy of activity promises to once again bring people in numbers to the “Deuce-Four” for entertainment. It’s the fledgling start of the arts-culture district designated in the city-approved North Omaha Village Revitalization Plan.

A couple pieces are in place. One is under construction. Others are on the drawing boards. The revival isn’t in full swing yet, but there’s enough happening to give a glimpse of what could be.

John Beasley is eying property in the area for a new theater. Other envisioned digs include a movie theater, large music venues and artist live-work spaces.

Historic anchors with strong community orientation have their own roles to play. The Omaha Star newspaper is a conduit for community happenings. The Omaha Economic Development Corporation and the Empowerment Network, housed in the Jewell Building where the Dreamland Ballroom held sway, are driving redevelopment efforts and sponsoring events.

Seasonal attractions are part of the scene, too. The North Omaha Summer Arts Festival is in year two, though most of its events happen on North 30th. The expanded Juneteenth celebration centered last month’s activities on 24th, where the Dreamland Plaza hosted outdoor concerts. Last year’s Christmas in the Village drew hundreds to venues up and down the street.

The LJAC at 2510 No. 24th is by far the area’s most established attraction. The gallery, live music and rental spot has come into its own after a rough patch. Executive director Tim Clark sees the makings of a destination district about him. “The stars are aligning with all that’s going on with the Union, the Bemis, the black museum and the Loves Center. I think people are ready for it.”

The center, whose membership has risen from 8 to 300-plus in two years under Clark, is seeing more visitors to national traveling exhibits, including the current Selma to Montgomery. Special programs, from a gospel play-soul food buffet to a fashion show, draw well. Events like a recent Family Day and Arts-Culture Expo found new audiences. Its “Jazz After Five” series owns a loyal following.

The idea is that as more stay-and-play venues open around the center and offer  activities, people will make a night of it by sampling the attractions, thereby dropping more traffic and dollars into a community starved for commerce.

“We’re trudging along and as we ramp up hopefully it’ll catch on,” says LJAC operations director Janet Ashley. “We’re all in this together, we’re very supportive of each other.”

Returning the area to a walking neighborhood is partly about overcoming perceptions, say Ashley and Clark, that the area is unsafe, which they insist it’s not.

“Being able to walk from one location to another is hugely important to the sense of vitality of the neighborhood,” says Hesse McGraw, chief curator of the Bemis Center for Contemporary Arts, a partner in the Gates project.  “The idea that you could come to a Jazz After Five at Loves Jazz and then walk to a opening at the Carver and then walk to an open studio or something at the Union, that’s a pretty dynamic thing.”

As events multiply and more patrons discover the area’s diamonds in the rough, not unlike North Downtown a few years ago or the Old Market a few decades ago, a critical mass of sit-down restaurants and retail outlets may join the party.

Around the corner from Loves Jazz a combined storefront eatery and art space is taking shape. Chicago-based artist and planner Theaster Gates, along with Rebuild Foundation of St. Louis, Mo, and the Bemis, is bringing new life to adjoining sites at 2416-18 Lake St. to house a Big Mama’s sandwich shop, three artist studios and a gallery.

For Patricia Barron, whose Big Mama’s Kitchen & Catering on No. 45th St. is one of northeast Omaha’s few destination spots, contributing to any revival is personal. Her father Elmer “Basie” Givens was a band leader when 24th jammed day and night with music and action.

“I can remember when 24th St. was just flowing with activity and so I’d like to see that restored, the arts, the music, theaters, stores, because this is my birth city and I love Omaha. We’re very excited. It’s been dormant for too long.”

McGraw says the art side of the site aims to be a launching pad for North O artists of color and a catalyst for more activity. He describes “an emerging excitement about a set of possibilities burgeoning in the neighborhood,” adding, “I think there’s an interest from the city’s perspective in imagining what could happen on that block west of Loves Jazz, where the city owns a lot of property.”

He says the area’s potential as a lively arts haven could be enhanced by a North Omaha Arts Alliance. Deborah Teamer Bunting, Heritage Arts Manager with the Nebraska Arts Council, is working with the Empowerment Network on formalizing the alliance by year’s end. She says shared resources could help joint funding and marketing efforts.

Clark, who’s hosting informal meetings with his arts neighbors, also sees the benefits of “this coalition” working together moving forward.

It doesn’t take much imagination to see the stirrings of a vibrant arts community,” says McGraw.

“I think the synergies are there and all these activities would be stronger in concert with one another.”

Bunting says it’s already “one of Omaha’s best kept secrets” and “its own unique community building on some of the history of North Omaha.”

A block south The Union is poised to be a destination. It hosts artist-in-residence studios and community projects, such as the North Omaha Tool Library formed by Kjell Peterson, at its 2417 Burdette St. site.

It seeks funds for the adaptive reuse of the adjacent Fair Deal Cafe as a gallery, lecture space and art library. The Fair Deal was THE Omaha soul food joint. So much social-political discussion happened there it was called the “black city hall.”

“We’re hyperaware of the fact that building has so much significance to this community and anything we do over there will be so respectful of that,” says Union founder-executive director McQueen. “I’m hoping people will be excited to see it used again and returned to a state of glory.”

This summer The Union is planting communal gardens and erecting an elaborate gazebo, all part of finishing out its multi-use campus.

“There will be seating, no gates, no fences, no nothing. It really is meant to be of the community,” McQueen says of the gardens-gazebo. “It’s creating an oasis that will always keep on the property and not build over that land.”

Urban agriculture is one of the Union’s many missions. “If we’re sustaining people visually and emotionally with the arts,” she says, “then we also need to be giving them an opportunity to grow food that sustains them in a better way.”

McQueen saw the area’s potential synergy May 31-June 1. That’s when a Great Plains Theater Conference play staged in the Union parking lot, with the Burdette building’s west wall as painted backdrop, drew hundreds, including area residents and workers. The sounds of traffic whooshing by and kids playing hoops across the street added “perfect” ambience to the urban-set play The Crowd You’re in With.

Conference producing artistic director Kevin Lawler says, “The arts are one of the most life-giving, healing, growth enhancing, healthy activities for a community, and this is a part of the city that has not had enough energy from the arts. So I want to work with groups like the Union to help to change that.” A youth theater program is in the works.

Additionally, the Union is developing an art-based after school program and a North Omaha murals project involving area youth.

“I think once kids and their parents start coming to the building that will help us get established,” says McQueen.

As more has been happening there, she says, the curiosity factor already has neighbors, including kids playing hoops at the Bryant Center courts, “coming over and asking questions…oh, so many questions,” says McQueen. “They’re excited to hear we’re doing art stuff over here.”

The Bryant Center Association operates organized leagues at its open basketball courts as well as programs for seniors and youths at neighboring St. Benedict the Moor Church. Funds are sought for a proposed anger management and life skills program. The focus is on giving kids positive, structured diversions along with mentoring, tutoring and counseling.

Jean Cain, who helps runs things at the Bryant, has noted the Union’s activities and sees potential collaboration with McQueen’s programs.

“I’m very grateful for her, I really and truly am. I do want to make that acquaintance because I do think there’s a partnership or a marriage that could be an ongoing thing.”

The Union is new enough and the Carver opening far enough away that even most Bryant volunteers and area residents don’t know about the organizations yet. That will take time. The Theaster Gates site will feature a glass front entrance and a Big Mama’s outlet to make a transparent and enticing “invitation” for the community to come check it out, says McGraw, He says it’s all part of a “radical hospitality that makes spaces welcoming by reaching out in a charismatic and gregarious way,” adding, “It’s this idea of having a thrown open front door, a place where there’s no expectations about who belongs there … there’s too few places like that.”

The black museum has a different challenge. It’s a well-known quantity that goes back to the mid-1970s but until monies are found to renovate its condemned home at 2213 Lake St. and/or to build a new one, it operates as a mobile presenting organization. It recently brought three Negro Leagues Baseball Museum exhibits to the metro, including two at Conestoga Magnet School not far from the 24th hub.

A mile or so southwest of the hub the Malcolm X Memorial Foundation has recently staked itself as an anchor with year-round programming at its new center.

Tim Clark and Brigitte McQueen say organizations like theirs are seeds that can grow roots that blossom into perennial attractions. But for that capacity building to take place resources are needed for more professional staff, among other things.

For all these disparate parts to form an effective, concerted North O mosaic or cohort that engages the general public, Clark says they must find sustainable support. He suggests a much larger pool of money than is presently available through funding mechanisms like the North Omaha Cultural Arts Committee is necessary to support the arts-culture district’s growth.

The catalyst effect Gates hopes to have with his project, which the Bemis is providing full financial support to for three years, can work the other way, too.

“There are new initiatives that are about to get off the ground in North Omaha that are really going to begin to change the game,” says McGraw, “and I think Theaster and Rebuild Foundation have a real interest in being part of those efforts. I think there are extremely exciting things on the horizon.”